Why can’t I enable CSM on my new motherboard?

This is a fun one!

You get a new motherboard with an Intel 500 Series chipset. You decide to just use the integrated graphics in the CPU, but you can’t boot!

It turns out your actual boot drive is missing from the Boot options menu. Gonzerooni!

END_OF_DOCUMENT_TOKEN_TO_BE_REPLACED 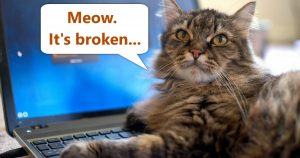 END_OF_DOCUMENT_TOKEN_TO_BE_REPLACED

The Intel SU2300 does NOT have “SpeedStep” as you know it

I’m mad as hell, and I’m not gonna take it any more!! (great movie, Network was…)

As if it wasn’t bad enough that Intel couldn’t write a driver that takes full advantage of the GMA500 in certain netbooks, now apparently they’ve resorted to sneakily “modifying” what “Enhanced SpeedStep” actually does.

I’m talking about the Celeron dual-core SU2300 processor in those fabulous “thin and light” notebooks that are quickly replacing netbooks so that everyone (except you) can make more money.

So, what’s the problem? The SU2300 does not have the “SpeedStep” that you think it does… which explains why no one can get it to work!

END_OF_DOCUMENT_TOKEN_TO_BE_REPLACED

Alrighty, I just can’t stay quiet about this one. I’ve had enough.

I’m talking about Intel’s GMA 500 graphics chip. You know, the one that’s in all those Z-series (and soon Pine Trail-based) netbooks, the one that gets all the bad reviews, and the one that is generally regarded as less capable than even that ancient, stinking heap of a graphics core, the GMA 950.

So why don’t you see this awesome performance on your netbook or MID?