First of all, let me just note that for each machine I was upgrading, I already went through the process I outline in Convert your Windows 10 boot drive from MBR to GPT. I also enabled Secure Boot and TPM, if present.

These machines all had 6000-series Intel processors, so no Win 11 support. I was upgrading each to a 12000-series i5, and each mobo had multiple NVMe slots.

So, it should have been a simple process: copy SATA drive to NVMe, boot Windows 10 from the new NVMe drive, and I’m off and running.

Instead, the BIOS wouldn’t show the NVMe drive. Well, specifically, I could set the NVMe drive as a boot device, but otherwise it was undetected. For example, in the BIOS’ PCIe settings area, it didn’t indicate that an NVMe drive was present in M2_1 – which is where I installed the drive.

Worse yet, I almost gave up entirely and just decided to install Windows 11 from scratch. Even in the Win 11 installer when it comes time to pick the C: to install to, the NVMe drive wasn’t detected at all!

This was my clue…

The way to fix this problem is really quite simple: Go into the BIOS and turn off VMD!

What the heck is VMD?

Intel VMD stands for Volume Management Device. It’s a CPU-integrated device to aggregate NVMe SSDs into a storage volume and do other fun stuff like RAID.

On this Dell support page, we read:

When you install Windows 10 or Windows 11 Retail, we must load the Intel Rapid Storage Technology (IRST) driver so that you can install Windows. It is normal, not a hardware defect.

OH… In other words, if VMD is enabled in your BIOS, then Windows won’t boot if the Intel RST drivers aren’t installed.

Also, you won’t even be able to do a clean install without giving the Windows installer the Intel RST drivers before it will even see your drive – because the NVMe drive is being managed by Intel VMD instead of just appearing as a normal drive detected by the BIOS.

How to turn off Intel VMD

This will depend on your particular BIOS/UEFI, but for Asus boards it will look something like this. First, boot into the BIOS, and select Advanced Mode: 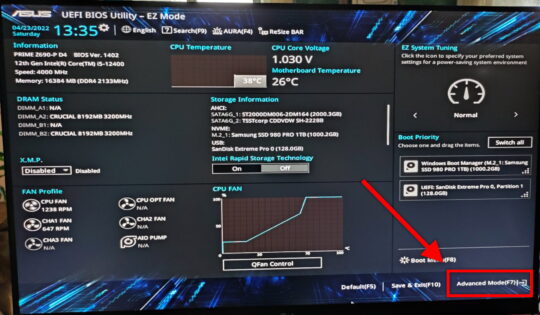 In the Advanced tab, click on System Agent (SA) Configuration: 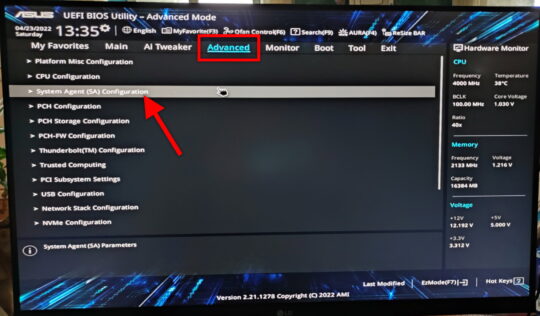 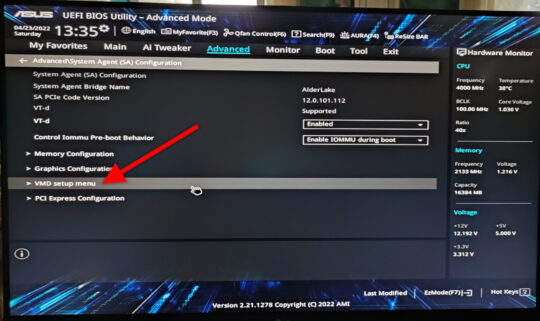 Finally, either turn off VMD completely, or just make sure that Map PCIE Stroage under VMD is disabled: 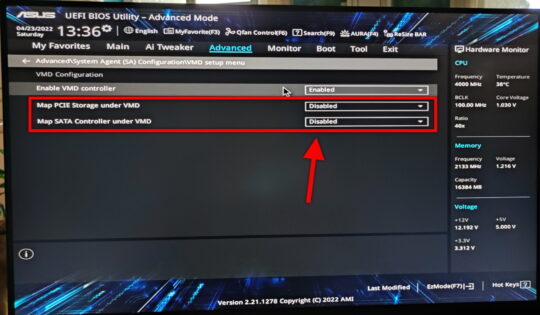 Go ahead and save + reboot, and you should be all set.

Not only will Windows 10/11 boot normally, but your NVMe drive should also appear when doing a clean install of Windows 10/11.

I used this trick to upgrade all the Win 10 machines, and they booted just fine from the new NVMe drives. I was able to get into Windows, install drivers for the new mobo + other hardware, and then reactivate Windows 10 using my earlier trick.

I found all kinds of “solutions” online about this problem. In almost every case, even the likes of Microsoft and Dell support were telling people to re-install from scratch!! It seems Intel VMD is the best kept secret out there…

Sheesh… Well, at least you know now how to save yourself a world of trouble and extra work!

Need a new NVMe drive? Check out the SAMSUNG 980 PRO SSD 1TB PCIe 4.0 NVMe Gen 4 (affiiliate link). Samsung SSDs are my drive of choice and the 980 Pro is a great value for the money!