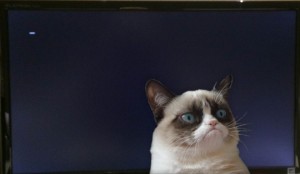 So, the first thing you’re gonna need to do is get into the BIOS. If you can’t get in because you see a blank screen instead of a “boot logo” during the BIOS POST (power on self test), you’ll need to:

Right. Now that you’re in the BIOS, you’ll need to check a few things. Note that the following screenshots are for the UEFI BIOS in an ASUS Z170-A motherboard

. This motherboard uses Intel’s new Z170 chipset, which is only a few months old.

If you find yourself with a similar very new motherboard, the absolute first thing you should do is update the BIOS. Especially with newer chipsets and motherboard, there will be many bugfixes released in the form of a BIOS update. Contrary to what most people will tell you, I’m telling you that in most cases, UPDATE YOUR BIOS.

I do this whole puter-building thing a lot, and I’ve been doing it for a long time. When you get a new motherboard, why wouldn’t you update the BIOS? With each BIOS release, the accompanying note is usually something like, “Improves system stability”, or “Improves compatibility with USB devices”. It’s a no-brainer!

The method of updating your BIOS varies by manufacturer, and you can find instructions in your motherboard manual. But usually, you just have to:

Flashing your BIOS will usually erase all your BIOS configuration settings, so remember what they are!

Moving along to how to fix all your New Motherboard Problems…

Again, the following screenshots and instructions are specifically for an ASUS Z170-A motherboard

, so your BIOS may vary. But, it’s pretty much guaranteed that your BIOS settings will be very similar.

First, get into your BIOS. You’ll prolly want to go the Boot settings, like so: 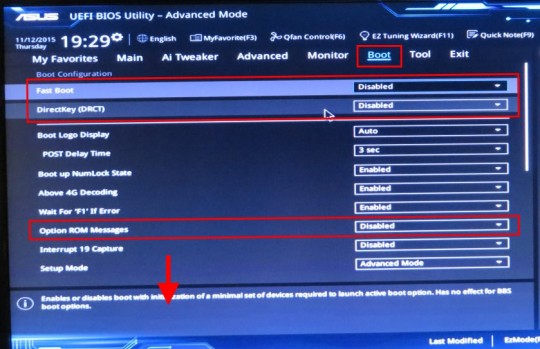 Notice that I have disabled Fast Boot and DirectKey, as well as Option ROM Messages.

On this particular motherboard, Fast Boot does very little to speed up the boot time if you configure everything else correctly. DirectKey is useless since there is no button to use on the case for this particular puter. DirectKey is a feature that lets you have a “reset button” that takes you directly into the BIOS. Option ROM Messages is kind of pointless – and slows down your boot time – unless you have an add-in card that needs to run its own sort of BIOS initialization mojo. You would also turn the Option ROM Messages on if, say, you wanted to enable your ethernet ROM in order to boot over the network… that sort of thing.

Next, on the same screen, scroll down, and you’ll see this: 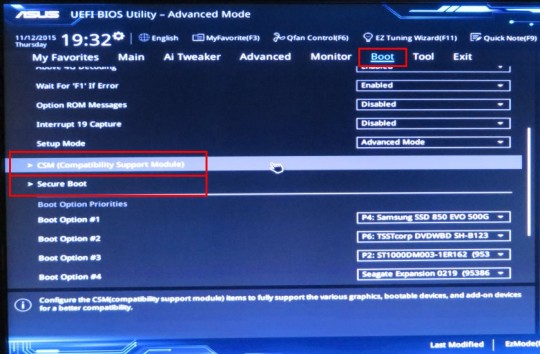 Here we get to the really important part! Click on CSM (Compatibility Support Module). You’ll see something like this: 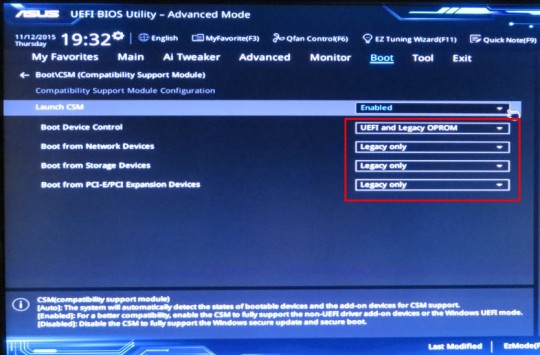 Now, you might think that you can set Launch CSM to Enabled, and then futz with each of the four settings underneath it. On this board, these were the default settings – although I have no idea why. I highly recommend that you do NOT do this – unless you really know what you’re doing. Set Launch CSM to Auto, like so: 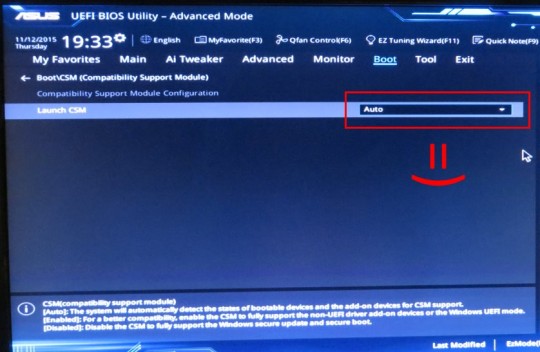 Why? Well, on this particular mobo, I had great difficulty getting Windows to boot. It also wouldn’t let me into the BIOS on reboot (I got the blank screen with a blinking cursor). Furthermore, when I did finally manage to get Windows to boot, I was greeted with this Windows load screen: 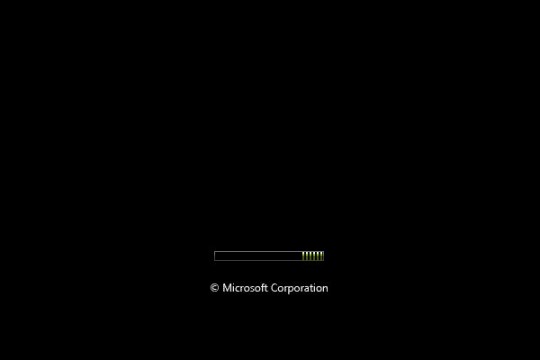 I concluded from this problem that Windows 10 was having great difficulty with some BIOS setting, and it was pretty easy to conclude that it was the CSM settings. CSM is a feature of UEFI BIOSes where the mobo will  (hopefully automatically) detect whether it should use “legacy BIOS” or “new UEFI” features for setting up your puter and launching the OS.

Hence, my recommendation to set Launch CSM = Auto. That fixed darn near all my problems with this particular Z170-based machine!

Finally, back on the main Boot screen, you’ll want to click on Secure Boot (see above image). Doing so will give you something like this: 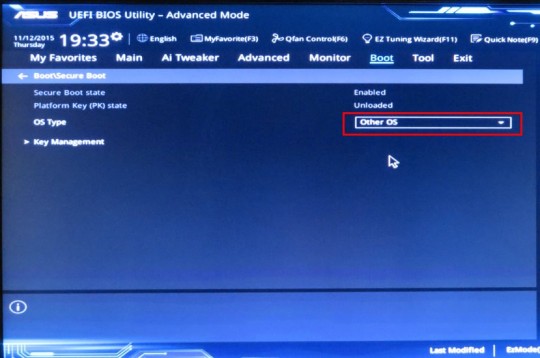 This is all about the whole Microsoft Secure Boot initiative. If you don’t want to use all this new-fangled weirdness, just set the OS Type to Other OS. Boom, done.

Now save your settings and reboot, and you should be all set. Well, don’t forget to set the proper OS drive as your 1st boot device. That’s kind of important…

Finally, note that with newer motherboards, you sometimes have to attach your USB keyboard and mouse to USB 3 ports. Yeah, it’s crazy, but that’s what happens when USB 2 ports start disappearing from the back of new motherboards!

Have fun – and above all, try not to throw your new puter out the window when it won’t boot! 😉