President Scottie: My fellow humans, The State of Technology, is, STROOOONG! 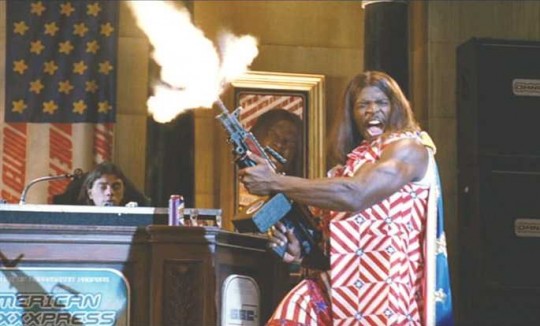 President Scottie: Shut up. Sit your monkey ass down. Chill out. Now I understand everyone’s shit’s emotional right now. But I’ve got a 3 point plan that’s going to fix EVERYTHING.

The state of technology is completely ridiculous. It’s very much like a car with square tires. Sure, it goes, but whaaaa?!

“What are you talking about??” you wonder.

Well, let’s see… Is it really necessary for you to have a thermostat in your house that you can control remotely from your smartphone, or the internet? Do we not remember how to program thermostats? Is your life really better because of it? Does anyone even remember mechanical thermostats? They worked. They lasted. You could even teach your dog to turn it up or down for you:

You have a smartphone or a tablet. It’s highly portable, it’s got a great processor (for a mobile device), and you can do all kinds of things like Tweet when you’re hanging out in the bathroom at the airport. The rest of the time, you play games on it and generally screw around in an effort to totally dissociate from reality. You don’t actually use it to do real work. But it has changed your life!

You buy everything online. That’s awesome. At the same time, you lament the fact that the economy is in the doldrums. Your country no longer actually produces anything, because everything is Made in China. But hey, you get everything cheaper, you need to buy replacement stuff because everything is cheaper, you never have to leave home to buy it all, and you can even buy stuff when you’re in the airport bathroom. And the only real person you ever have to talk to is… yourself. WOW… Now that is modern convenience!

At the same time, your children can’t get a job because there are no jobs, your city/state/country is bankrupt, your politicians are corrupt, and all the small businesses that your children could have worked at have closed or are closing because they can’t compete. Somehow, that whole “information economy” they talked about 10 years ago just never seemed to actually materialize. Y’wanna know why? [WHISPERS]: Because it was all bullshit!

Oh, sorry… This is supposed to be an article about the State of Technology. I’ll try not to talk about important things.

So, what’s next? The following is my expert opinion about what you can expect for the year 2014 in the technological arena:

1. Google is all big on robots 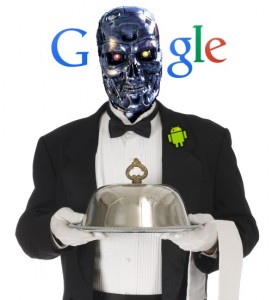 Forget drones, dude! Now, not only will you be able to buy stuff from the comfort and solitude of your very own bathroom, but the NSA won’t even need to hack your accounts and record all your data the old fashioned way. No sir, your Android Butler: Banana Cream Pie will not only cook, clean, and take good care of you, he’ll also record your every move and let the alphabet soup folks know what’s up. And if you find yourself stabbed to death in your sleep or suffocated with a pillow by Android Butler, fear not! At least you won’t have to worry about your unemployed, unhappy, internet porn-addicted children (yeah, it really is that much worse, and it is directly technology-related).

2. Microsoft will release Windows Next. Someone, somewhere, will sneeze. 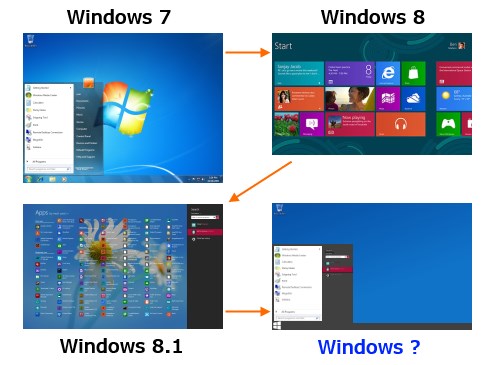 Microsoft claims that the next version of Windows will bring back more desktop goodness, because they finally listened to me when I said, “Whoa! WHOA! Real people don’t do real work on a phone or tablet, they don’t have touchscreen desktop computers, and they certainly can get a lot more done with a mouse and keyboard!”

Rumor has it that “Windows Next” will have 2-ish versions: one for mobile devices, and one for real computers. Ya know, like they had before with their smash-hit Windows 7 and their No-One-Cares “Windows Phone Mango”… In short, they have reluctantly and vaguely admitted that their idea with Windows 8 was flat-out retarded. So they’ll move on – back to what they used to do – and call it something new and futuristic.

Speaking of Microsoft, Paul Thurrott revealed that Microsoft has released three awesome games for Windows Phone: Mahjong, Minesweeper, and Solitaire Collection. Now, you might think this also fits nicely in the “Oh wow, I really don’t care…” Department, but check this out:

Now that they’re available on Windows Phone 8 as well, some interesting possibilities emerge: Thanks to Xbox Live integration, you can pause a game on a Windows PC or device or a Windows Phone handset and then pick it up again on any other supported device. So you can go back and forth between Windows and Windows Phone.

NO WAY!! That’s almost as earth-shattering as… Wow, it’s so sad that I can’t even think of a smartass remark – and that IS rare…

But frankly, I love Microsoft. They are so totally clueless about most things that if Microsoft is the biggest “tech threat”, then I’m not worried at all. I’d rather have MS’ Hilarious Insanity than Google’s Big (Robotic) Brother.

In any case, yes, that is the current Mobile Trend from the Microsoft side of things. What about Android? Google seems to be taking over the mobile space with all these Android-based goodies, right?

Well, in 2014 you’ll need to spend more money you don’t have to get a new smartphone. And this time, it will be 64-bit (which really doesn’t matter in a smartphone at this point), and it will probably have a 4K 5.5″ screen. What exactly is a 4K screen? Permit me to elaborate: 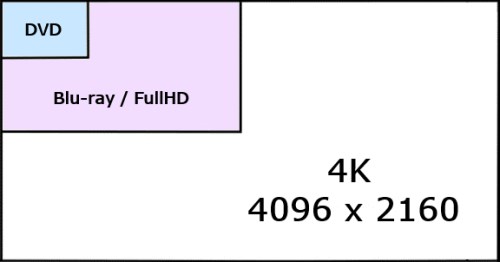 – 4K is roughly 4 times the resolution of FullHD, or 4096 by 2160 pixels. Now, this ridiculously high resolution that the average human being will probably not even notice will not only be on a 52″ TV screen – oh no! It will also be compressed down into a 5.5″ screen on your new smartphone. WHAAAaaaaa?

Remember the switch from VHS to DVD? You probably noticed a difference in picture quality. Remember the switch from DVD to Blu-ray? You probably did NOT notice that much of a difference. Most people I talk to didn’t notice. Now, imagine FOUR TIMES the resolution of a Blu-ray movie, all crammed onto a tiny little 5″ screen on your phone. Well, hell’s bells! You really NEED one of those, yeah?! Eh, no. But that’s what’s coming in 2014:

More mobile. More Screen. More bits.
And none of it matters to anyone! 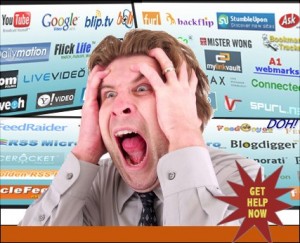 I love these things. I go onto Amazon or some other online shopping site to look at something (not from the bathroom), and then I go to Facebook. What does it show me? Why, it shows me 3 separate ads of EXACTLY the product I just looked at. Now, I mean… DAMN… That is some smart advertising! I mean, the fact that I didn’t buy the item in question from Online Store A doesn’t dissuade them from throwing the product back in my face – THREE TIMES!

No sir, they won’t show me similar products, or the same product at a reduced price, or even products in the same general category; they will just keep showing me that dang item until I go buy it! Except that I DON’T go back to Online Store A and buy it because I’m so irritated at their complete and utter stupidity! Apparently, online advertising at all companies is now managed by rabid monkeys (no offence to monkeys intended).

Anyway, don’t worry: 2014 will bring more Stupid Ads. With flexible display technology, I fully expect ads for things I don’t want to show up on everyday household items: product labels, magazines (this little Moto ad is just the beginning), and probably even toilet paper. And if I get an Android Butler: Banana Cream Pie, I will name it Chalmsley (pronounced “CHUM-lee”). And then I will anxiously await for him to say:

Sir, are you sure you don’t want to purchase [INSERT PRODUCT NAME] from Amazon? It is still available for the same price as when you decided not to buy it when you were online 13.4 minutes ago. Here, let me show you a picture of it again…

Sir, your Google Shades are detecting a slight increase in heart rate and perspiration. I think that you would feel much better if you bought [INSERT PRODUCT NAME] right now.

Then, I suggest you get some fresh air. If you don’t feel like walking, I can push you around the neighborhood in your Man Stroller.

And then I will seemlessly continue my saved game of Farmville, which I will also be able to play on Chalmsley’s 4K Tummy Screen. SweeeEEET!

Well, if you made it this far, I commend your bravery. Let me know, and I will send you a cookie. I will close by noting that yes, I really do love technology despite, “all my negativity”. In fact, I take the statement, “You’re so negative!” as a compliment since it means that I have more electrons than other people. It is generally supposed that the human body has a net negative electric charge, after all!

Well, perhaps I should say: I really love what technology COULD do for us. I just don’t see it happening right now if things continue on their present course.

But, I suspect that more change than we know is in the air for 2014!