END_OF_DOCUMENT_TOKEN_TO_BE_REPLACED

Get your politics out of my tech! 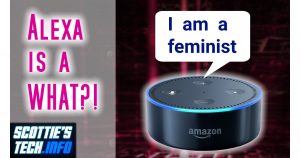 From James Damore being fired for speaking his mind in a very “leftist” corporate culture, to Amazon’s Alexa declaring that she is a feminist, to DNA testing services telling everyone they’re African to “combat racism”…

It seems that amidst all this political/social mayhem, our tech has essentially been weaponized.

We may still have separation of church and state, but it seems that the political and social views of tech corporations are being pushed onto people via their products.

I don’t think that’s a wise course of action…