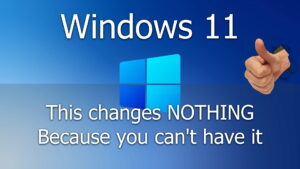 Too bad you weren’t planning on buying a new PC right now.

What about your current one that runs just fine?

Sure, Microsoft updated their PC Health Check app, which will still tell you that you can’t run Windows 11 unless you have:

From there, it gets even more hairy… I just read a complaint that a guy who has a 2-year-old Xeon-based PC can’t run Windows 11 – despite the fact that his processor is about as high-end as you can get. Nope, sorry.

What about 7000-series Intel processors? NAH! Not supported.

Now you’re probably thinking, “Hang on a minute… Doesn’t that mean that the majority of PC users out there will NOT be able to upgrade to Win 11?

That’s exactly what it means. Contrary to popular belief, most people do not upgrade their PCs every 3-4 years. Instead, they spend money on things like smartphones, tablets, gaming consoles, and Doritos.

What does M$ have to say about all this?

Same as before, really.

While AdDuplex claimed that 4.8% of Windows PCs are already running 11, that’s a bit optimistic. Their estimate was based on 60k users who aren’t exactly the standard when it comes to PC users.

What’s worse, Microsoft is keeping silent on the Win 11 adoption rate. That’s not surprising because – since no one can actually get it yet – the adoption rate is realistically closer to zero.

In an effort to appease the masses, Microsoft declared that even if your puter doesn’t meet all the requirements for Win 11, you can still install it.

That’s right… You can download the Win 11 image and do a clean install only. Oh, and you may or may not get updates (that part is about as clear as mud right now).

So, in short, if your PC doesn’t pass the PC Health Check test, you can be an eternal Beta Tester for Microsoft – and just reinstall your whole OS every month when they release updates… I guess?!

Not sure what they’re smoking…

So, at the risk of repeating myself: Don’t worry. Just wait.

If M$ continues on their current course, then way less than a majority of users will ever use Windows 11. This has several problems:

The desire for TPM 2.0 and Secure Boot and all that jazz really IS a good idea. It’s just not practical for them to make it a requirement for Win 11. On their own, these security requirements simply aren’t going to make a big enough difference considering their massive user base.

They’re trying to go The Apple Route, and I’m afraid that just isn’t going to work.

What’s more, it’s also not practical to expect normal users to convert their disk to GPT, then change to UEFI boot, then add Secure Boot, and finally enable software TPM in the BIOS.

I mean, I thought about making a video on how to do all that, but JAYSUS! It’s not simple if you don’t know what you’re doing. In fact, it can result in epic data loss and other problems if you’re not careful.

And for most people these days, an expensive new computer just isn’t on the cards.

So, we wait… And eventually, Microsoft will come to their senses and you probably WILL be able to upgrade to Win 11 despite their (current) strict requirements.

Either that, or you won’t… because, like Facebook, Microsoft may be too busy announcing something insane like they’re changing everything to focus on their new  augmented reality platform called Microsoft Augmented Reality for Building a Life in the Ether (MARBLE).

Like Edge, it will probably be based on something Google did… Aaand no one will use it. 😉

UPDATE 3 November 2021: Well, I was wrong. today MS announced their new augmented reality thingie called “Mesh for Microsoft Teams”… Which I guess would make it MFMT!