First of all, a short history: stunnel is a lovely piece of software that you can use to create a TLS/SSL tunnel for services that don’t have encryption.

For example, you can configure a POP3 mail server to listen (unencrypted) on port 110 as usual. Then, you block port 110 in your firewall, open port 995, and configure stunnel to:

In other words, stunnel is a sort of “encryption wrapper”. It’s seriously handy, and can be used for all sorts of other nifty things.

The trouble comes when you find out that there is a bug in the older 4.x version of stunnel available via apt in Ubuntu 18.04 LTS.

In short, it’s possible for a hacker to send a certain “data packet” that causes stunnel to completely crash – as in, KAPUT!

This is obviously Very Bad Juju, because it allows hackers to create bots that essentially cause Denial of Service attacks against your server.

If anyone and their grandmother can send a few bits to my server’s stunnel on port 995 and crash stunnel, no one else can download their mail from my server until stunnel is restarted! Oops.

In short, this is not a small bug – it’s a high priority bug that should have been fixed last year.

And yet, this is what actually happened: 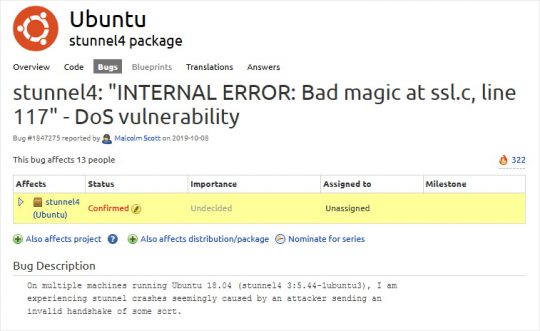 That’s the bug reported to Ubuntu way back in October 2019. Note that the bug is confirmed, but the importance is set to undecided and the bug has not been assigned to anyone.

IOW, in Ubuntu Server 18.04 LTS – the long-term support version – a DoS bug has been left unfixed by the Ubuntu gang for 8 months!

I can tell you for a fact that the bug affects WAY more than just “13 people”. The reason I know this is because hackers started banging away on 3 different servers I manage in 3 different locations beginning in January of this year.

The reason more people haven’t confirmed it is because it’s a royal PITA to find that bug description, and there is literally no information at all on The Great Internet about how to fix it.

Besides, it’s a DoS vulnerability… If only 3 people confirmed it, isn’t that enough? Even ONE person reporting it should have meant that the stunnel package got an update ASAP – especially in an LTS version of Ubuntu Server.

Geez, maybe I should just switch to Windows Server?! Bugs get fixed just as slowly in Microsoft Land. So much for linux being so much better and more secure…

stunnel5 snap: NOT the solution

Okay, so the Ubuntu gang isn’t gonna fix it. Great.

But I’m still left with a DoS vulnerability that I need to patch.

Go on, install the stunnel5 snap, which you can find here. 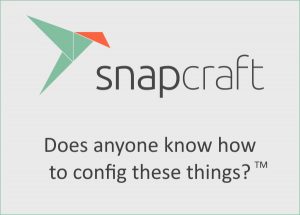 Next, tell me if you can figure out how the HELL to get the thing to accept connections.

Try as I might, I couldn’t figure out how to get the stunnel5 snap to actually bind to a port on my server. It has no interfaces.

Maybe it’s just this one snap I tried to use, because Snaps are a brilliant idea.

Instead of a package that needs to be bundled for different systems/package management systems/linux flavors, snaps are basically a compressed file.

That compressed file is sort of like it’s own bundled “linux image” with the single app you want to install. Snaps are sandboxed from your actual OS install.

So, snaps can run on any flavor of linux, kind of like a “universal app”.

It’s a fantastic idea, but getting around the sandboxing so that apps can actually do what you want them to do is often a total mystery.

In searching the net for help, I found more people complaining about how complicated snaps are – and how they rarely work – than I did actual help! SIGH…

And if I’m just an idiot, why didn’t someone from Canonical simply post to that bug and say, “Hey! No worries! Use this snap, and here’s a guide on how to config it: [link]” Is that so hard?

Okay, okay… How do I fix it already?!

Now, I know what you’re thinking: But, but, it’s HARD! Stuff won’t work! I’ll have to update manually!

Yes, you will have to manually update. But you can go to stunnel.org and sign up for their mailing list to notify you when updates are released. Piece of cake!

The latest version of stunnel can be downloaded here.

Without further ado, this is how to install and configure stunnel 5.56 from source on Ubuntu 18.04 LTS (run via sudo or as root):

When a new version of stunnel5 is released, you can be notified by the stunnel-announce mailing list.

Then just repeat the above process to install the newer version. Specifically, you’ll need to do Steps: 3-8, and then run: systemctl restart stunnel5.

No more DoS attacks, and you’ll always have the latest-and-greatest version of stunnel.