Censored on Social Media? What else is new… 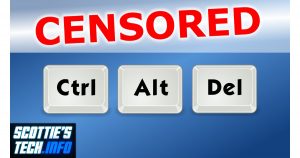 Why is it so difficult to accept that just because we don’t like what a person is saying, that doesn’t give us the right to shut them up?

Why can’t people ever agree to disagree? It’s absurd.

And if you think, “Well, but these are private companies and they can do what they want,” think again! It’s a bit more complicated than that…

And that’s all I have to say about that. For now… 😉