First of all, there are a few common misconceptions about the actual speed of WiFi vs a wired ethernet connection. So, let’s get that cleared up first.

If you are using WiFi, it’s quite likely that the actual speed of your WiFi is far slower than 1 Gbps.

It actually operates on 2 different bands, so you get either 450 Mbps or 1300 Mbps, depending on which band you’re using.

To make matters worse, the maximum speed you’ll get with WiFi also depends on whether or not the area you are in is saturated with WiFi signals for that band. These super-crazy speeds depend on the use of channels and multiple “streams”, so the more WiFi is around you, the more likely the airwaves are “overloaded” – and thus your throughput drops.

And mind you, this is a $110+ WiFi Router! Chances are, you’ve got a much simpler and cheaper model, especially if you’re using the built-in WiFi on your ISP’s modem.

Of course, this is all supposed to be mitigated by 5GHz WiFi, but…

WiFi is not so simple

It’s also quite likely that the WiFi in your puter is not exactly the fanciest model. Most puters come with “bare bones” WiFi. Yeah, it might support the latest IEEE 802.11 protocol, but that doesn’t mean it does it well.

There are huge differences between lower-end WiFi cards in laptops (for example), and higher-end “pro” WiFi cards. With cheapy WiFi cards, throughput is already lower due to poor signal quality, and many of them can’t take full advantage of things such as the “multi-stream fanciness” that gives you speeds like 1.3 Gbps.

To see what I mean, check out the max speeds on Intel’s Wireless Products Selection Guide page. If you have the common Intel Wireless-AC 3168 WiFi card in your lappy, the max speed it supports is 433 Mbps – and that’s maximum ideal throughput.

So, the big problem with WiFi is that it’s complicated. Achieving peak throughput isn’t guaranteed, and it isn’t easy.

Ethernet to the rescue!

Naturally, if you have a wired network and very fast broadband internet, you don’t want to use a 100 Mbps (Fast Ethernet) connection between your puter and your ISP’s modem! That would be kind of silly. What you need is gigabit ethernet.

As regular readers know, I’m a big fan of wired ethernet networks. Why?

Because it’s MY network, nobody else’s magical waves can get in the way, it’s far more secure, and it always works at full speed.

Oh, and it’s 1 Gbps. All you need is to wire all your gizmos together with the proper inexpensive Cat 6 cables, and use cheap gigabit switches as “nodes” to connect your devices together. 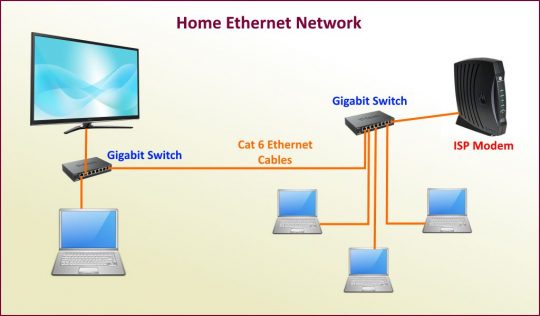 Each orange line is a Cat 6 ethernet cable. You just connect all your gizmos up using cables and switches, and it usually “just works”.

If 1 Gbps isn’t fast enough for you, keep in mind that 2.5 and 5 Gbps ethernet is coming soon: Faster ethernet coming without cable changes. Booyah.

Also, keep in mind that some laptops especially come with cheaper Fast Ethernet adapters built in, which are only 100 Mbps. If that’s the case with your puter, grab a gigabit USB-ethernet adapter.

But what switches and ethernet cables should I buy?

These switches are also quite handy: If you connect your puter or gizmo and the light for that cable blinks green, it’s running at the 1 gigabit speed.

If the light is orange, it’s only 10 or 100 Mbps, so you know you need to get a new ethernet adapter as mentioned above.

As for ethernet cables, you just need to make sure you get Cat 6 (Category 6) cables. Ethernet cables usually have the category printed on them, like so: 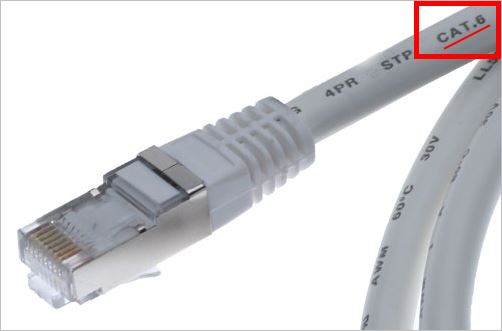 Other than that, any old Cat 6 cable should do the trick, like this one on Amazon which comes in various lengths:

Note that there are other types of ethernet cables, including Cat 5, Cat 5e, Cat 6a, etc.  Any cable that says at least Cat 6 is fine (regardless of the letter at the end, if any). Just don’t get any of the Cat 5 cables, because those were designed for less than 1 Gbps ethernet.

By the way, the connectors on an ethernet cable have very little to do with signal quality and speed. The four twisted pairs of wires inside the cable make a far, far bigger difference. The higher the Category, the faster the cable will pass data. That’s why you want Cat 6 or higher, because Cat 6 is for gigabit ethernet!

Also, there are foiled, shielded, and other types of Cat 6 cables. If you want to make your own cables and crimp the connectors on the ends, I usually choose FTP (sometimes called F/UTP), or Foiled Twisted Pair, which looks like this inside: 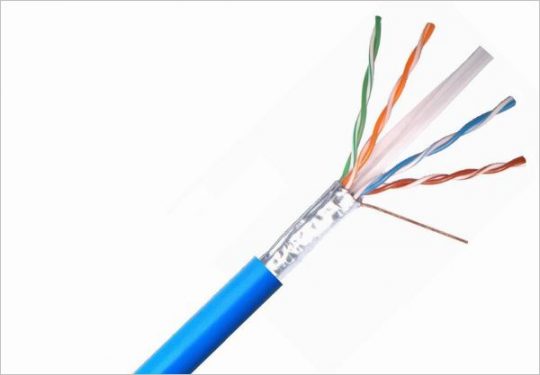 If you’re just buying a premade cable, don’t worry too much about the shielding (if any). Just make sure it’s Cat 6, and you should be good to go.

Finally, a few tips and notes about running ethernet cable all over your house:

Cat 6 cable is a bit more robust due to the plastic core that spaces the twisted pairs of wires, but you should still not abuse the cable too much. The more squished, crimped, and mushed the cable becomes, the more the wires inside shift around, and the lower your data transfer speeds will be.

If you want to make your ethernet cables pretty, don’t miss: Run cables the easy way: with a hot glue gun

So there you have it! Now your wired house network will be the same speed as your internet connection if you have crazy-fast broadband.