Of course, you could just buy a new lappy… But that’s an expensive proposition.

Wouldn’t it be nice if you could use some other port on your laptop for your network cable connection?

Well, there is a way to do exactly that! It’s called an ethernet dongle.

Don’t ask me why the heck they call it a “dongle”. It’s a goofy word. But ethernet dongles are seriously handy devices. 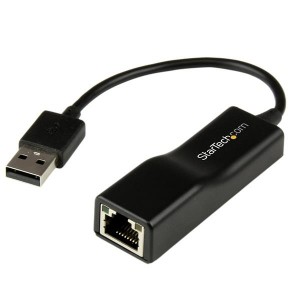 As you can see, one end is a USB plug. The other is an ethernet jack.

The idea is that you plug the gizmo into a free USB port on your lappy, and then plug the ethernet cable into the other end. Your puter will detect the new USB gizmo as a “communications device”, and hopefully your operating system will automatically detect the ethernet chip inside the dongle, install a driver for you, and poof! You’ve got a new network connection. You may commence surfing!

In some cases, you will need to install a driver that comes with the ethernet dongle, usually on one of those teeny-tiny CDs.

There are various types of ethernet dongles available, such as this one from Apple for the MacBook Air:

A few final notes about what type of dongle to buy…

Normal USB 2.0 plugs have a maximum data rate of 480 Mbps (megabits per second). Fast ethernet is only 100 Mbps, and gigabit ethernet is 1000 Mbps.

However, note that in many cases, you will need to install the driver that comes with a USB 3.0 ethernet dongle, whereas drivers are needed far less often with USB 2.0 / Fast Ethernet dongles.

Other than that, check for a compatibility notice before you buy. Most dongles on Amazon come with a note that Windows and Max OS X are supported, but Android is not, etc.  If you are using Windows or Linux, you should be pretty safe, even if you might have to install the included drivers when “plug-n-play” doesn’t quite work.

And there you have it! You can pay $10-20 and have a fully functional lappy again.

Finally, note that you can do the same for a desktop PC, which is a lot easier for those who prefer not to open their puter and install a PCI or PCI-E networking card!