You know the drill: You turn on your puter, and it doesn’t boot, beep, or do anything else. What it does do is power itself off again after a second or two.

Or… Your puter works fine, but it spontaneously enjoys turning itself off.

Whatever could be the matter?

Naturally, the first thing you’ll think of (because you’re a genius) is that something is broken – and you’ll probably guess that it’s the power supply.

Not so fast! There’s one thing you need to check first before you invest time and money replacing a bad power supply…

So, if the puter turns on, and then turns itself off almost immediately, you might think it’s RAM, or a bad hard drive. But in that case, you should at least get the BIOS/UEFI boot screen, and you don’t.

Thus, you quickly eliminate those as probable culprits.

You might even think that it’s something like the graphics card, or some add-in card… And it might be, but again, you don’t even see the normal boot screen. It’s almost like the whole puter isn’t getting power.

And so, at this point you will conclude that you’ve got a bad power supply. And you might be right. But first, check the actual power switch on the front of the computer.

Now, everyone knows there’s a power switch on computers. You use it to turn the computer on and off. So what?

Well, it’s not actually a real power switch in the sense of a light switch (on/off). Instead, it’s a “momentary contact micro-switch”.

It’s all, like, electronicified and stuff.  Well, again: So what?

What do you think happens when this momentary push-button microswitch gets sticky – or stuck? The switch might be telling the power supply to turn on (and off) immediately, or at weird times.

So, what might be happening is that your power button is stuck (or partially stuck), and that’s causing your puter to turn on, and then immediately turn off.

Before you replace your power supply, remove the front panel of your puter, and remove the power button microswitch. It usually looks something like this: 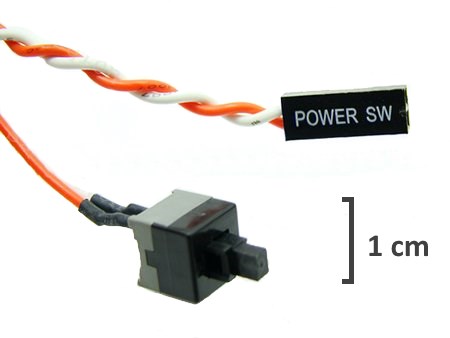 Power Button switch + header that connects to the motherboard

Notice the 2-pin “POWER SW” header, which is connected to your motherboard. The little teeny switch on the other end of the wires is the actual momentary switch. Usually, this switch is hidden behind a much larger, human-finger-friendly plastic button. The Giant Human Button just pushes on this Teeny Little Switch. The little switch usually clips into place, so you just need to unclip it from the back of the front panel, and pull it out.

You will need two handy chemicals for this: 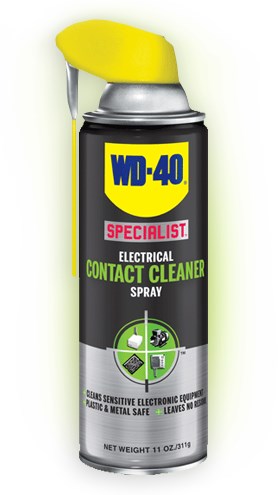 First, spray some contact cleaner in the switch as you push the teeny little button. If necessary, push it in, spray, and then pull the button back out if it doesn’t spring back on its own. Repeat this several times until the switch seems to move more freely.

Then, repeat the above process once with the silicone lubricant spray.

The contact cleaner does what it says: it cleans electrical contacts (and then evaporates, leaving no residue).

Then we need to lubricate the switch, so we use the silicone spray. Most silicone sprays of this type are not electrically conductive. You do NOT want to use a drop of machine oil or any standard petroleum-based lubricant inside your switch! Unless you like starting fires, of course…

At this point, your little micro-switch gizmo should be switching again, nice and smooth. Reinstall the switch in your puter, and see what happens.

Worst cast, your power supply is still dead… but at least then you’ll know it’s not just the power button, and you only lost a few minutes checking.

Besides, silicone spray is very handy for many things, including spraying on rubber door seals to rejuvenate them, and for lubricating all kinds of stuff!