Our story begins with a little e-mail I received the other day. The basic message can be found here:

Of course, the idea that Microsoft of all companies is warning me about security is kind of laughable, so I didn’t pay much attention. Nevertheless, there was this little voice in the back of my mind that kept pestering me, so I decided to dig in and see what all the hoopla was about… or indeed if any hoopla was even warranted.

Boy, is it ever warranted!

From the above link, we read:

Microsoft is announcing a policy change to the Microsoft Root Certificate Program. The new policy will no longer allow root certificate authorities to issue X.509 certificates using the SHA-1 hashing algorithm for the purposes of SSL and code signing after January 1, 2016. Using the SHA-1 hashing algorithm in digital certificates could allow an attacker to spoof content, perform phishing attacks, or perform man-in-the-middle attacks.

Okay, so that’s probably like trying to read a foreign language to most people. Even I didn’t understand exactly how these hashing algorithms were used with SSL. So, I started digging. What I found nearly floored me:

Now, if you thought the M$ advisory was confusing, take a peek at the above link.

In summary, way back in 2008, some smart people figured out a way to make themselves a Fake SSL Certificate Authority, and they accomplished this feat by using a weakness in the MD5 hashing algorithm.

“Eureka! This must be the key to our mystery,” I thought.

So, I began to read… and re-read… and think… and re-read. And then it clicked. To paraphrase Inspector Finch:

I suddenly had this feeling that everything was connected. It’s like I could see the whole thing, one long chain of events that stretched all the way back before the MD5 hash advisory in 2008. I felt like I could see everything that happened, and everything that is going to happen. It was like a perfect pattern, laid out in front of me. And I realised we’re all part of it, and all trapped by it.

“Well, that’s stunningly dramatic,” you think, “But just… What is going on?!” 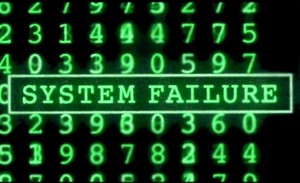 This is a digital certificate, with a digital signature, that verifies that a website is who they say they are. When you connect to a web site using SSL (HTTPS), your browser says, “Papers, please!” The remote site then sends the SSL Web Site Certificate to your browser. Your browser then verifies the authenticity of this “passport”. Once verified, encrypted communications ensue. The point of the SSL Web Site Certificate is that under no circumstances should anyone else be able to create a valid, signed certificate for a web site that they do not own and operate. In order to obtain an SSL Web Site Cert, you must verify by varied means that you are the owner and operator of the web site involved. So, using HTTPS is not only for encryption of communications, but also a way to verify that the site you are communicating with is the Real Thing, and not an imposter. And of course you must pay for the certificate! 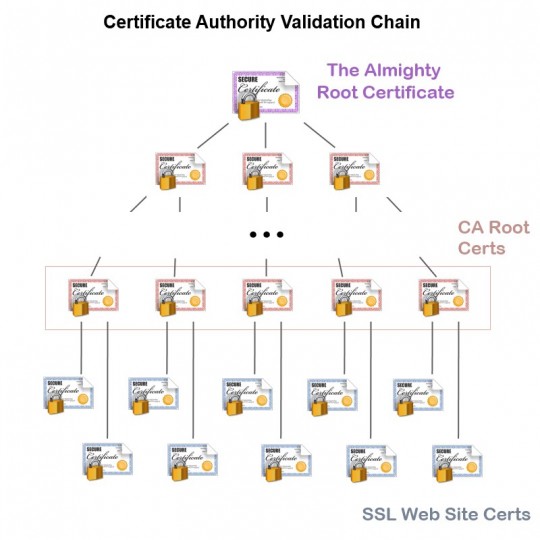 Now, where do these hash algorithms like MD5, SHA-1, and SHA-2 come into play?

This information is verified before a certificate is issued. Once verified, a hash of the data is generated. This hash acts as the digital signature for the certificate. The only thing you really need to understand about hash algorithms is that what is supposed to happen is this: 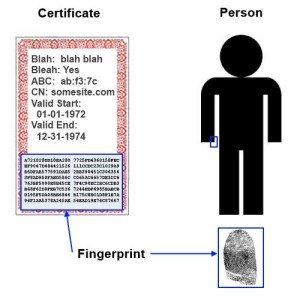 Right. There is such a thing as a “hash collision”. This is when you have 2 hashes that are identical, but they were generated from different data. That’s like if you and your neighbor suddenly had the same thumbprint. OOPS!

Now, think about that for a minute… If the police were using these hashes, or thumbprints, to verify your identity, they might mistake you for your neighbor, or your neighbor for you, if you “had the same thumbprint”. If they did no other checking, and just relied on that thumbprint, they might very well “authenticate” your identities completely incorrectly. BIG OOPS!

This is exactly what happened with the MD5 SSL attack outlined at the above link.

Now, recall that a CA Root Certificate – as long as it has a valid hash/fingerpint that will validate up the “chain of authority” – can be used to generate a valid SSL Web Site Certificate for any web site in the world… And neither you, nor RapidSSL, nor your browser will ever know that anything is amiss.

Why is this a problem? For starters, consider a man-in-the-middle attack. 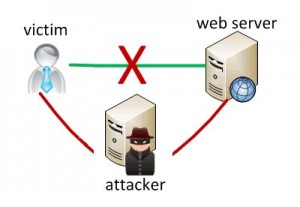 You want to go to https://www.gmail.com. But some “hackers” have used another type of hack to insert their server between you and Gmail. Normally, this would not be possible, because you’re using HTTPS! You’re SAFE!

As far as anyone knows, you are connected to gmail.com over HTTPS. But in reality, what’s happening is this:

In other words, SSL / HTTPS means that the connection between your browser and the destination server at the URL you’re visiting is supposed to be encrypted. But due to the fact the certain types of SSL certificates (which help handle the encryption) can be forged, an attacker could set up their fake server that pretends to the be the real destination server, and thus insert themselves in the middle of the connection. When that is done, the attacker has control over the connection and the data, and can thus decrypt your data, manipulate it, and/or pass it on to the real intended destination server.

Now, isn’t that a daisy?

“But wait!” you say. “Isn’t it therefore good for Microsoft to recommend changing the hash function to SHA-256 if SHA-1 has the same potential problem as MD5 did back in 2008?”

Because all it takes is for ONE Certificate Authority to use a “weak” hash algorithm, and someone who is up to no good can generate a forged CA Root Certificate. Once they have that, they can generate as many SSL Web Site Certs as they want – using any hashing algorithm they please – including a fake-yet-valid cert that they can use to impersonate your “secure” site!

In other words, the weakness in the hashing algorithm is just the tip of the iceberg. Due to the hierarchical “chain of authority” in the whole certificate system, if anyone manages to create a false CA Root Cert, they are more or less god in terms of creating false SSL Web Site Certs.

Thus, in order for Microsoft’s words to have an effect, there must not be ANY Certificate Authority (Web Site Cert issuer) in the whole world that still uses SHA-1. In order for the “security” to actually be more secure, everyone must upgrade right now. But this isn’t going to happen.

Now, if that isn’t bad enough, think about all the NSA spying. Think about how many people said, “Naw, man, I just surf using HTTPS, and I’m totally safe!” 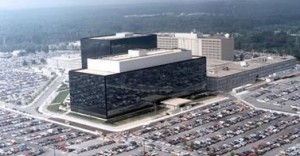 Guess who invented the SHA-1 hash algorithm in 1995?

So, why should all the Certificate Authorities switch from the NSA’s SHA-1 to the NSA’s SHA-2? Why, because the NSA created it the way they did for a reason!

SHA-1 already has been theoretically breached, and there are a few indications that SHA-2 isn’t quite as super-duper-safe as everyone thinks.

Imagine you are the NSA. You want to spy on everyone, everyone’s grandmother, the grandmothers’ cats, and the mice that are currently being digested inside the cats. SSL is kind of a problem… It can use pretty annoying encryption. Well, hell! No problem. Just compromise the “certificate authority chain” by forging one little CA Root Certificate, and blammo! You can eavesdrop and man-in-the-middle anybody you darn well please, SSL or not!

Web sites over SSL? No problem.

E-mail over SSL? No problem.

And do you know why all this (and much, much more) is possible?

Because just like you, I had no knowledge of the gaping holes in SSL. Awareness of this and many other issues – technological, political, psychological, social, etc. – is absolutely essential.