Ferrite: Those magic thingies at the end of your cables 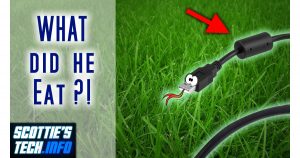 You’ve probably noticed those strange cylinders at the end of your puter cables.

As it happens, those strange meals are actually ferrite cores.

Ferrite is a totally magical material!

END_OF_DOCUMENT_TOKEN_TO_BE_REPLACED 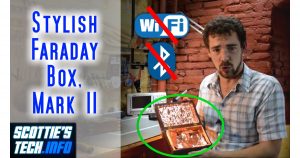 9 months ago, I made this video: Make your own stylish smartphone Faraday Box in 10 minutes

Since then, I’ve learned a ton more about Faraday cages, and experimented a lot to make an even BETTER box.

It turns out that my original box was only so-so at blocking Bluetooth. My original testing of Bluetooth blocking was, shall we say, not very thorough. My primary focus was blocking cell network signals.

I also mistakenly assumed that if Bluetooth was blocked, WiFi at 2.4 GHz would also be blocked. Nope! WiFi is much harder to block due to the higher signal strength (among other things).

And so, I give you: Stylish Smartphone Faraday Box: Mark II