Make it stick with Superglue Secrets! 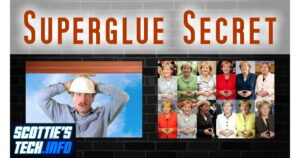 Well, I suppose there are some people who glued their fingers together one time…

Anyhow, superglue is still super-useful. There are just a few tricks you should keep in mind for best results.

You can save a ton of money and even unstick your fingers in record time.

So join me for the secrets of of my favorite adhesive!!

END_OF_DOCUMENT_TOKEN_TO_BE_REPLACED

Superglue: Everything you need to know, and some things you don’t 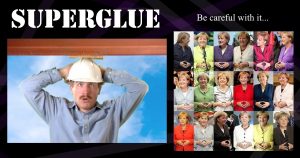 Originally discovered in 1942 by American scientists who were trying to come up with good transparent gun sights during WWII, superglue is the “sticks to everything” goto adhesive for all your gluey quick-fix needs.

And frankly, until you’ve superglued two fingers together, you really haven’t lived…

Anyway, there’s probably a lot about superglue that you’ve never heard before. So, read on, and then you can go impress your friends with your amazing knowledge of cyanoacrylate adhesives!

END_OF_DOCUMENT_TOKEN_TO_BE_REPLACED

How to Remove SuperGlue from your Fingers and Skin

There’s only one problem: it also bonds skin.

Another problem: it’s hard to remove from skin once it dries – or even before it dries.

Most people will tell you to use nail polish remover. Others will spend way too much money on official “Superglue Remover” products.