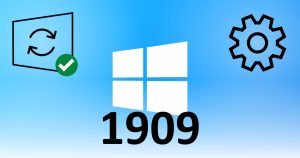 Yet another new version of Windows 10!

A new update to Windows 10 was released just a few days ago, and once again the rollout was quite smooth.

The difference this time was that 1909 isn’t really a “Feature Update”.

It installs very quickly and changes… well, pretty much nothing!

Not your usual Feature Update

Okay, so first of all, this is NOT a normal Feature update.

In other words, you don’t have to download a 3.9 GB update and then wait as 1909 installs itself over Windows 10 1903. No multiple reboots, no “something went wrong” messages, no nossing, Lebowski!

1909 is actually just a cumulative update, and apparently the underlying OS is pretty much identical.

As for new features, there are almost none. The only two notable ones are:

When notifications appear in the Action Center (the pop-out thingy on the right side of the screen), you’ll now be able to disable notifications for a specific app without going into Settings and clicking 5000 times.

Searching for files in File Explorer will work as before, but now it will also include any files on your OneDrive account. You know, files you have stored in the Almighty Cloud because you don’t mind sharing them with the entire world, and especially with the NSA… 😉

There is literally nothing to see here. Every single one of my settings is exactly as I left them, and I didn’t find any new settings to play with.

Your old Gadgets will still be there in Win 10 1909, but for good measure you should probably upgrade to the latest version of 8GadgetPack.

If you have the EU-friendly N version of Windows 10, you’ll notice that your Windows Media Player is NOT missing after the update to 1909.

If you do need it for some reason, you can download the latest version of the Media Feature Pack and install it.

At the above link, choose version 1903 to download the newest feature pack. It should work fine with 1909.

I should note that the next version of Windows 10, which they’re calling 20H1, or 20-o-Something, or Windows 10 Asparagus Pro Update Thing, or god knows what, will appear early next year.

Interestingly enough, the word on the street is that the first Win 10 update in 2020 will be a big one. Rumor has it that this build will also have been tested for a full year!

That should mean that the next time we get a Win 10 update, it’ll not only add some nice new features and fix some problems, but hopefully it won’t cause our puters to catch on fire or delete themselves.