You can’t say that!

Anyone still breathing knows that these days, you’re not allowed to say certain things.

People are accused of certain activities on social media, and electronically lynched. Several high-profile cases saw various individuals losing their jobs, their reputations, and pretty much everything else – simply because of an accusation of some wrongdoing that in many cases wasn’t even criminal.

If you’ve ever tried to post a video on YouTube, you know what you can and cannot say. YouTube itself is allowed to post whatever it wants, which they do, even in violation of their own policies.

And don’t you DARE say anything even remotely positive – or simply something not negative – about the likes of Russia or China. That’s a big no-no!

Naturally, this “correctness” has saturated the mainstream media as well. Frankly, the majority of us are sick to death of all of it.

We already have a social credit system 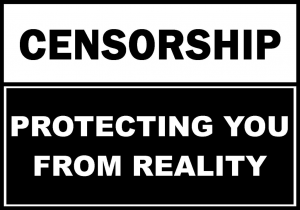 Many people – including the MSM and social media – have badmouthed China’s social credit scoring system.

I don’t think it’s a terribly good idea myself, but that doesn’t mean I won’t give credit where it’s due to the country – for example, on the technology front.

The fact is, Chinese tech firms and researchers have frequently blown western tech companies out of the water recently. Witness the fact that the only complete 5G system at a reasonable price comes from – guess who – Huawei!

Now, as regular readers know, I’m not a fan of 5G. But as I said, give credit where it’s due: The Chinese are out-innovating western – and especially American – companies.

And sure, they steal stuff. So do we, and so does everyone else. That’s good old fashioned competition for ya. Do you really think CEOs of our own tech companies got there by being fair and balanced and lovey-dovey with everyone else? Eh, no. Usually not. That doesn’t mean they’re all evil, though.

And as for the evils of China’s social credit scoring system, don’t we already have that here in the west?

The West does it Best

When mainstream news is basically all “fake”, no one can tell who’s lying and who’s not, and too many people believe the most outrageous nonsense based on zero evidence, well… That sounds like effective propaganda at work to me.

Meanwhile, literally everything you say and do is being recorded, stored forever, analyzed, and sold to the highest bidder. We don’t even need intelligence agencies anymore because people willingly PAY for and install spy cameras and microphones in every room in their house, while also carrying around similarly nosy smartphones all day.

Finally, as previously mentioned, if you say or do the wrong thing, your life and livelihood can easily be destroyed via both mainstream and social media.

So, yeah… Tell me again how evil China is? Do you think maybe everyone is desperate to point out the speck in China’s eye in order to avoid noticing the beam in their own? Do you think maybe, “Russia did it!” is really just an idiotic effort to avoid having to look in the mirror?

Well, they are, and it is. Look, nobody’s perfect. So before we go pointing the finger at someone else, how about we sort out our own crap first? 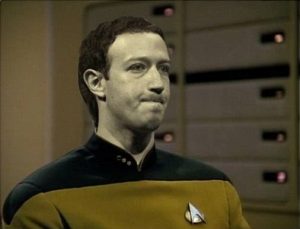 It all started when FB banned conservative political performance artist Laura Loomer from its platform.

FB cooked its own goose, because as a platform, they are protected. They aren’t responsible for what their users say. In their defense against Loomer, FB claimed it’s a publisher.

That solves one problem, but creates another: If FB is a publisher, they can be held liable for content they allow to be published and may even be hit with defamation suits in many places.

Naturally, Zuck did a quick U-turn. Now, he says FB must allow everyone to lie or say whatever they want. In other words, they better stick to just being a platform. It’s all about free speech, you see… at least on the surface.

I suppose it doesn’t help that Facebook’s Libra e-currency was recently torpedoed instead of being widely embraced and lauded.

That’s a good thing, because if there’s one thing we really don’t need, it’s a Big Tech-controlled currency on top of everything else.

The Beginning of the End?

So, is this is the start of the end of Big Tech?

Probably not. But it’s also worth noting that Zuck also spoke of how he doesn’t think breaking up giant, powerful tech companies like his will solve any of our problems.

Well, duh! He would say that.

We’ll have to wait and see where things go from here. But it’s pretty clear after these latest events that the road to World Domination will at least be a bumpy one.

And I suspect there are more surprises in store…