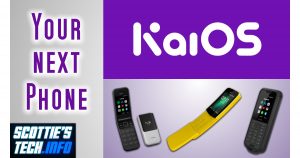 Even better, KaiOS is basically what PWAs will become on normal smartphones: KaiOS apps are actually just HTML5 + CSS + Javascript, running on a Gecko-based browser engine tied tightly to a small linux kernel.

The end result is the perfect non-Android, Google-enabled dumbphone. You can do stuff like Facebook or WhatsApp if you want, but there are NO Android-type apps.

Note that the KaiOS app store is totally separate from Google’s Play store, and there are 130+ apps already available – and growing daily.

So, for your new dumbphone, give KaiOS a try!