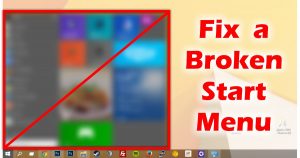 Well, okay, just because this fix has worked for me doesn’t mean it’s gonna work in your specific case. But I couldn’t find anybody else talking about it.

I actually got the idea from one of those Microsoft support site posts – you know, the kind where the MS techie responds as least 72 times with the exact same copy/paste post.

Then, someone else says, “Hey, I think it’s related to Live Tiles on the Start menu…” 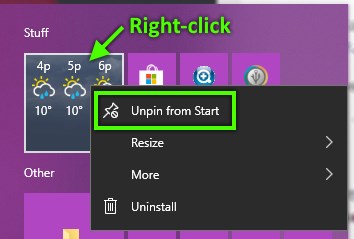 The idea is that there is some issue with live tiles for various apps. When the tile tries to update – or something – the Start menu goes kaflooey.

I just remove all non-essential built-in live tiles from the Start menu, and then I never see the problem again. One exception: the Weather tile seems to work just fine, so I usually leave that one alone.

If that doesn’t work, you can find other methods to fix the Start menu here.

None of those solutions worked for me on multiple puters that had this problem, but as always, YMMV!

If you find another solution, I’m all ears!