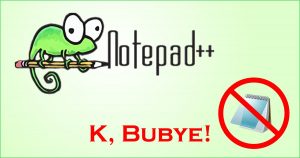 I am of course talking about Notepad++.

Now, you may remember an article I wrote back in 2012 entitled:  Sublime Text: A Programmer’s Text Editor for the Rest of Us. At the end of this article, I mentioned:

I still keep Notepad++ around for my general purpose text editing needs since it is far, far better than Notepad or WordPad.

But, I’m thinking even Notepad++’s days may be numbered…

I still have and use Notepad++ regularly!!

Sure, you could try WordPad, which is built in to Windows just like Notepad. But WordPad is essentially a dumbed-down version of Word.

If that works for you, great! But many of us need a text editor without all the formatty fluff – a program designed to edit actual old-fashioned text files: maybe some config files, some static HTML pages, and maybe even some minor programming stuff.

In that case, neither Notepad nor WordPad give us what we need.

In addition to all the sassy editing features you’d expect from a “not-Notepad” text editor, you get:

Note that you get tabs for each open file and a Plugin system that lets you enhance the functionality of Notepad++.

Now, if some of that makes no sense to you, don’t worry. Notepad++ works like Notepad, but with a whole lot of goodies piled on top.

If you want to use the advanced features, go nuts. If you don’t, no worries.

You can also use Notepad++ as a programmer’s text editor, but I still prefer Sublime Text is my primary editor for that kind of thing.

Then again, Notepad++ is perfect for editing HTML and CSS files, and it comes with syntax highlighting and fancy editing features aplenty.

I even use Notepad++ for To-Do lists and that sort of thing. I use it and like it so much, I simply must give it the Official Scottie Seal of Approval:

Again, if you just want something better than Notepad, then Notepad++ is also perfect for you.

Best of all, it costs you nothing.

Note that when you install it, it will ask you if it should take over opening files that Notepad would traditionally handle. Say yes, and you’re off and running.

Do check out Notepad++ because it’s a huge improvement over Windows’ editors. At the very least, you’ll be glad that never have to see Microsoft’s Notepad ever again!