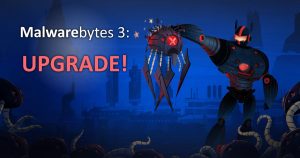 As regular readers know, I’m a big fan of Malwarebytes. It’s simply the best I’ve found when it comes to removing the baddies with the least amount of pain, suffering, and no perceivable performance hit when it’s keeping my puter safe.

Version 3.0 comes with lots of nice new toys and improvements, such as:

Now, the big ones here are faster scan speeds, no more reboots to remove malware unless it’s totally necessary, and the new user interface.

New UI: Yup, the new user interface is simpler, more intuitive, and more sensible. All the settings are now on one “screen”, with tabs for different groups of settings. Pretty nice.

How do I get the new version?

Well, theoretically, you should get it automagically. As I said, I have the paid version, and I still haven’t gotten an upgrade notification.

Now, it’s possible they’re rolling it out slowly to people, but the latest version of Malwarebytes is already at 3.0.5, so I was all like, “WTH, peeps?”

In the FAQ section of their announcement for version 3, Malwarebytes notes:

So, I just went to the Malwarebytes.com homepage, and clicked the Free Download button. Then, I ran the installer. DONE! It recognized my lifetime license and everything – didn’t even need to reboot!

It also kept all my settings exactly the same, so it’s really a no-brainer: Download, install, carry on.