Install Bash on Ubuntu on Windows

Okay, the first step is to install Bash on Ubuntu on Windows, which I shall henceforth refer to as BUW – pronounced, “BOO!”

As in, “Holy crap! I’m frightened by the fact that Microsoft actually included linux in Windows, because it probably means the world will end in 3 days!” 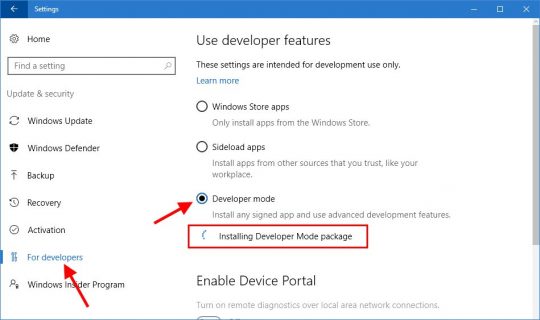 As you can see, Windows 10 will install the “Developer Mode package”.

When it’s done, you’ll have a new “Bash” program in your Start Menu, but with a generic app icon. The next step is to click Start, and then run Bash.

In the lovely command prompt that pops up, you’ll be asked to install “Ubuntu on Windows”. Press Y. 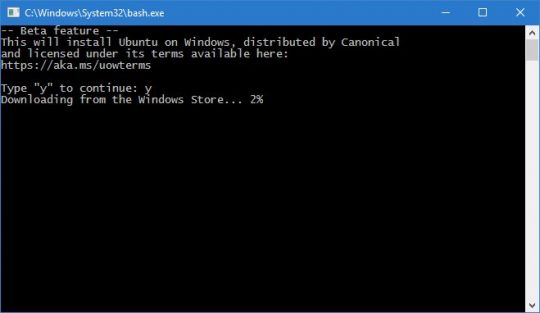 When that’s done, you can click Start again, and then click Bash on Ubuntu on Windows – which has now changed to the pretty orange Ubuntu logo.

Ta-DA! You now have Bash on Ubuntu on Windows.

IMPORTANT: Right-click your Bash on Ubuntu on Windows icon on the desktop or taskbar, choose Properties, and set it to Run as administrator. If you don’t, things like ping won’t work in Bash!

This part is pretty easy. Since BUW is just an Ubuntu shell running in a sort of “reverse-WINE” on top of Windows, you just install stuff like you normally would in Ubuntu linux. For example:

You can now configure git and use it as you would on a dedicated linux box, or via VirtualBox or VMware.

Note that your local Windows hard drives are accessible at the following paths in Bash:

Install gitk – for that graphical touch

So, you’re pretty happy. You can grab a git repo, edit the files locally in Windows or with vi in Bash, and then push your changes using git in Bash. It’s all seamless and glorious, and no more bloated nasty ultra-fancy Git for Windows nonsense…

BUT, it would be really nice to have gitk, don’tcha think?

Well, despite Microsoft’s claims that BUW doesn’t support running graphical apps in separate windows, you can do this very easily.

Congratulations! You now have a lightweight X Window Server on your Windows 10 box. All that’s left is to tell BUW where to find the X Server so linux apps can draw pretty windows with a GUI and everything: 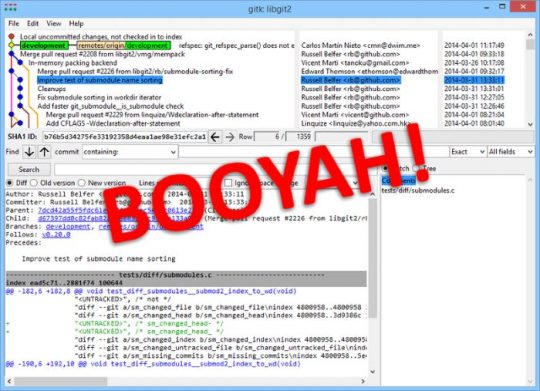 git + gitk on Bash on Ubuntu on Windows… on Land on Country on Earth on Space on Universe!

Note that this little “trick” also seems to work well for other graphical linux apps. For example, you could install Firefox in BUW, and run it.

Poof! Linux Firefox running via Xming on your Windows 10 desktop!

Well, yeah… Bash on Ubuntu on Windows is still beta.

But so far, I’ve been using it since its release, and it’s pretty darn stable on my end.

Finally, be aware that after you install BUW, you may occasionally see a Bash window pop up and run updates out of the blue.

Apparently, Windows Update also automagically invokes Bash updates to keep BUW up to date for you.

I’m not totally sure what it’s doing since it ran so fast that I didn’t have time to read anything, but it looked like an apt-get upgrade.

Which is even MORE sassy…