Windows 10: What you need to know

Windows 10 comes after the much-hated Windows 8, so many people are wondering if it’s actually worth the upgrade.

I can’t tell you if the upgrade is right for you, because I’m not sure I even have the final build as a “Windows Insider” (I have been testing Win 10 builds on my laptop as they are released for some time now).

I can tell you some simple facts that will help you make up your mind, and hopefully cut through some of the rather ridiculous hype that has popped up in recent days related to the new OS.

If you liked Windows 7, and you didn’t like Windows 8, you’ll probably like Windows 10. For example, here are a few screenshots of the latest build of Windows 10 courtesy of WinBeta: 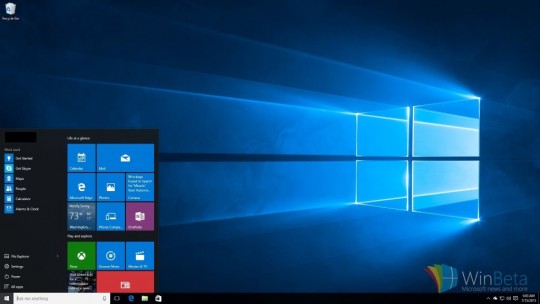 You’ll notice that the Windows 10 start menu is a combination of Win 7 and Win 8.

You’ve got your normal Win 7 stuff on the left – with minor changes like “All Programs” becomes “All Apps” – and you’ve got your silly “live tiles” from Windows 8 on the right.

Now, I dunno, some people seem to like these Totally Amazing Live Tiles, but I think they’re totally idiotic. I might change my mind, but I doubt it.

Before I installed Win 10 on my lappy, I was running Windows 8, followed by Windows 8.1. I never liked the Win 8 tiles or the “start screen”.

Overall though, I will say that fans of Windows 7 should find the Windows 10 Start Menu to be familiar and easy to use. 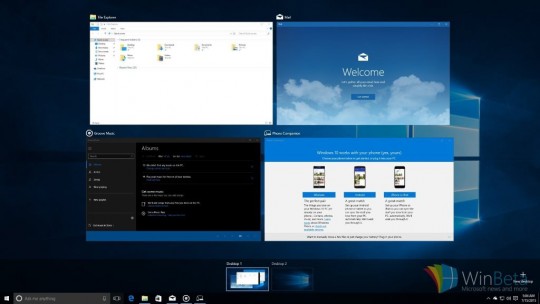 Here we see that, at long last, multiple desktops have finally come to Windows. Yes, I know you could do this with add-on software, but that’s lame. It’s a feature that has been built it to linux and the Mac OS for ages now. Well, power users should like this feature, anyway…

Also, window drop shadows have returned, and some transparency has returned. It’s not quite as pronounced as in Windows 7, but generally speaking, I find that it makes overlapped windows onscreen look way less flat and confusing than in Windows 8.

Also, the Control Panel and various settings are once again displayed in a Windows 8-esque “Settings” screen, like so: 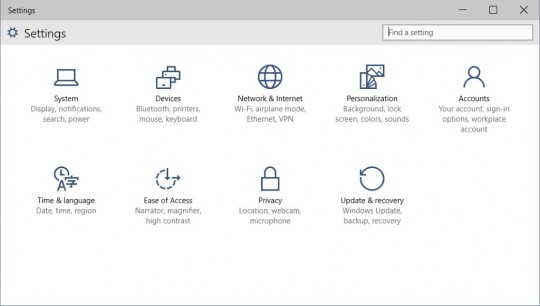 The old Control Panel is still there, but I think most people will find this new Settings screen easier to use. It’s better than it was in Windows 8, for sure.

Each of the icons in the above screen leads to a more refined Windows 8-style Settings screen. Overall, I suspect that most ordinary users will find the more “Mac-like” interface much easier to use.

And for you power users that don’t like things to change, in Windows 10 it seems there are always 2 ways to do most things: the Old Way, and the New Way. Take your pick.

Will my programs work in Windows 10?

Does it run in Vista? Then it will run in Windows 10.

Windows 10 doesn’t really introduce any bone-jarring changes in terms of software compatibility. Everything should still work.

There will always be a few exceptions, of course, but the answer is usually: Yes.

What’s new under the hood? Well, this goes back to Windows 8. The one reason I really hated how Microsoft screwed the pooch with their “Start Screen” in Win 8 is because Win 8 itself had some serious under-the-hood upgrades.

Win 8 included lots of goodies, like faster boot times, improved memory usage, and all kinds of other clever tricks that resulted in Win 8 feeling zippier than Win 7 on the puters I installed it on.

Fortunately, the same is true of Windows 10: It’s got all the performance goodies on Win 8, but with a Start Menu that people can relate to and use, and some added goodies like multiple desktops and Cortana.

What the hell is Cortana?

Think Microsoft’s version of Siri. That’s Cortana. I don’t like this feature at all, mainly because I don’t think this voice command stuff is really ready for primetime. It’s slow (depending on your net connection), and it’s unreliable.

People expect their voice-command interaction with their gizmo to work like talking to the computer in Star Trek, and that’s really not what happens in real life with systems like Cortana or Siri. 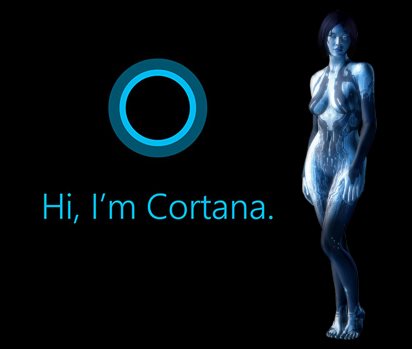 Oh dear god, save me…

And of course, naming your voice command feature after a more or less naked AI “woman” from the Halo video game series is just… sad. You can imagine the MS marketing people desperately deciding that their voice interaction system would be, like, totally hot dude!

Plus, I’ve read that Microsoft recommends that you have some kind of fancy high-definition ultra-spacial microphone system or something for best results, which most people don’t have. Assuming that’s true, it’s a flop before it even launches.

Project Spartan: aka Edge, aka the new Internet Explorer

Since Internet Explorer historically sucks bigtime, they’ve decided to change the name to Edge. Rather edgy, don’t you think?

Well, I’ve used it, I said, “Meh!”, and that was the end of that. People are so used to Microsoft’s browser sucking that it would take a miracle (or perhaps several) to get anybody’s attention on the browser front.

I would be very, very surprised if many people even sneeze when (and if) they ever use MS’s new Edge browser.

Windows 10 is no different, and I really dislike this. Note that if you want to use certain features like Cortana (voice command stuff), you must use a Microsoft Account. That’s lame.

I don’t use these fancy features, so it’s a local account for me.

The idea here is that if MS gets you to use your MS account to sign in to Windows on your home puter, then suddenly your life will be transformed into Total Digital Lifestyle Awesomeness In The Cloud.

I will say that for some people, this will probably be pretty handy. For me, I want my local computers to be as isolated as possible from Microsoft’s online services. When I want integration, I’ll use it.

But most of the time, I don’t want all my shit being copied onto Microsoft’s servers. And I certainly don’t need to talk to my computer (and then wait 1 minute while it tries to get an answer over my slow internet) using Cortana. On a phone, I can dig voice command… Oh wait, I never use it even on my phone!

What does it cost?

It’s free. You heard me! For the first year after the July 29th 2015 release of Windows 10, Microsoft is giving a free copy of Windows 10 to anybody with Vista or Windows 7 who wants it – for free, permanently. You may have seen this on your puter: 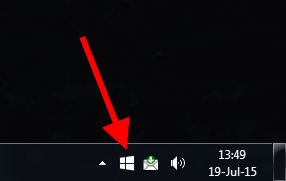 If you want Windows 10, just double-click that icon, and sometime after July 29th, it will automatically be downloaded to your puter. When it’s ready to install, you’ll get a notification. You click, it upgrades, you’re done. Booyah.

Obviously, Microsoft realizes they screwed up with Windows 8…

The free upgrade offer ends after one year, and then you’ll have to pay for an upgrade to Windows 10. It seems you’ll be able to get it for $119 (Home version) or $199 (Pro version), either via download or on a USB stick at retailers like Amazon.

Note that there doesn’t appear to be any catch: Free means free, and the OS is yours to use legally without any added fees or anything like that, ever – as long as you accept the free upgrade within the 1 year “Yay, it’s free!” period. They really are giving Windows 10 to people who want it for free.

So how are they going to make money? Damned if I know. I think they want people to sign in with a Microsoft account, and then buy lots of “Apps” from the Windows Store, pay for a subscription Office 365 service, etc. Frankly, I don’t think things are going to work out the way they expect (especially in this economy), but I’ll certainly accept the free upgrade!

What’s with this stuff about Windows as a Service?

It’s a bunch of baloney.

We now live in a brave new world of Windows.

It is called Windows as a Service (WaaS) and while Windows Insider Program members have been getting a taste of this since its debut last fall the real implementation begins now with the release of Windows 10 Build 10240.

This is a mind altering, perception crushing change to what we are used to when it comes to Windows and it is time to get onboard with it.

That is exactly how Windows as a Service will work for everyone afert [sic] 29 July. If something needs updated then it could feasibly arrive in the form of a new build, a Windows Update or an app update in the Store.

Windows 10 will never truly receive a label that indicates it is done. That is why there has not been a big deal made about RTM by Microsoft because that milestone just does not mean what it once used to in the days of previous versions of Windows and creating the installation media for distribution to partners and retail channels.

IMO, this is all a bit overboard. There’s nothing “mind-altering” or “perception-crushing” going on here.

And as with previous versions of Windows, yes, it will be improved over time, bug fixes and features will be added via updates – or service packs or whatever you want to call them – from Windows Update.

But in the end, nothing has really changed at all. It’s still Windows, you still install it on your puter, and it still updates now and then. The only thing earth-shattering about it is that this time, Microsoft really did listen to its users and gave them something much, much closer to what they were actually asking for.

Should I get Windows 10?

Darned if I know!

I can tell you that I upgraded from Win 7 to Windows 8, and I ended up going back to 7 on my desktop. I kept Win 8 on my laptop. The whole time, Windows 8 worked fine on my lappy, but I hated certain things about it.

I’ve been using Windows 10 test versions on my lappy for months now, and I really think I will end up upgrading to 10 and keeping it on my desktop. Of course, I won’t make any guarantees…

But I do suspect that many people will find that Windows 10 is a good upgrade to Windows 7, especially at a cost of FREE!