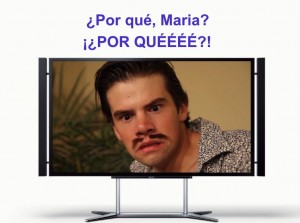 You expect to enjoy a glorious movie-watching experience, but instead, your movies look like TV shows or soap operas.

As it turns out, the problem is your fancy new TV. Get ready for this: it’s too realistic, and your brain doesn’t like that.

Read on to find out how to fix it!

So, what’s going on?

It’s quite simple actually, if a little bizarre. Traditionally, movies are filmed at 24 frames per second (even with digital cameras). That means that every second, 24 frames are displayed on the screen, et voila! Moving pictures!

If you watch a soap opera, they look “cheap”. Truth is, they look more realistic. The reason is that they are broadcast at what amounts to a higher framerate, which is actually 60 “fields per second.” Don’t worry about what a “field” is – just know that to your brain, this looks more like real life. It looks more like you’re watching a play, not a movie.

So, in actuality, when you watch a movie, you are viewing a less realistic moving picture. The problem is that we have become accustomed to 24 fps, and we even like it better because it adds a sense of “not-realness”. It’s a psychological thing, but in short: movies aren’t real life, so we like it better when they look more like a fantasy version of reality. We unconsciously expect motion to be not-totally-perfect when we watch a movie in the theater or at home. It’s a subtle detail, but very important.

So what’s this about your new TV screwing things up?

Most people like to watch sports on their giant TVs. For sports, it’s really nice to have a higher frame rate. So, most new TVs have a feature that adds frames. It literally guesses what the missing frames should look like, and adds them in. The end result is that your football game looks SUPER-realistic, super-fluid, things in motion onscreen appear smoother, and it’s just like you’re there! Ooo!

The downside: well, you already know… If your 24 fps movies are also “realified” by your TV, it looks like a soap opera, and then you cry because you wanted the “less real” look when watching a movie.

To fix it, all you need to do is dive into your TV configuration and turn off a feature that will be called something like:

It sounds complicated, but all you really need to do is grab your TV remote, press the Menu button, and go into the “Picture Settings” – usually. Find anything that sounds like the above examples, and turn it OFF.

Remember, this is something that your TV itself is doing because of it’s “super-high refresh rate”, so you won’t have much luck looking in your Blu-ray player settings.

If you do like watching sports, you can turn the frame-adding feature back on for sports only.

Why Movies look like Soap Operas on your new TV – and how to fix it
Tagged on: movies    soap opera effect    soap operas    TV
Shortlink: