Until recently, I got a lot of use out of Google Translate. It worked great, it was fast, and its web page translations were good enough.

But then, something changed.

Now when I use Google Translate in Firefox to translate a certain URI, it seems to get stuck in some kind of loop and then craps out.

So I found a lovely alternative: Bing Translate!

So, this is what I get now with Google Translate: 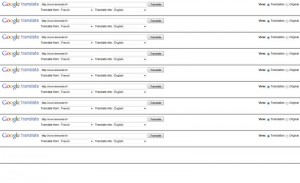 No, it isn’t. In fact, it’s downright retarded. Sometimes I have to click Reload like 80 times, and then Google will finally lower itself to providing my non-Chrome web browser with a translated web page. Sometimes not…

Well, a few weeks ago I was searching for something totally unrelated, and I stumbled upon some blog somewhere (I can’t seem to find it again – sorry!) that included an interesting little tidbit.

Apparently, the theory is that Google made Google Translate not work properly in other browsers either on purpose, or in order to make it work beautifully in Google’s own Chrome browser, which of course has a nice integrated web page translation feature.

Well, I dunno. I do know that Google Translate works pretty well in IE8 and IE9, but it absolutely sucks in Firefox 3, 4, and 5. And it didn’t used to suck.

And frankly, I’d had enough. I mean, honestly people, even if the change wasn’t intentional, surely the good folks at Google test their web services in multiple browsers, right? It’s not like they don’t have the manpower or financial resources…

Enter Bing Translate, which can be found at http://www.microsofttranslator.com

And so, I present to you The New Hotness: 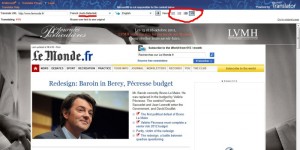 First of all, it automagically detects the language of the web page you want to translate, and translates it into to English by default. Nice.

Then, you see those little buttons I circled in red in the image above? Well, they let you select one of 4 modes:

Of course, no automatic translation is really worth a hill of beans, but still, I’ll take Bing Translate over Google Translate any day. At least it works in whatever browser I choose to use.

Finally, I have to say that I’m a bit surprised at Google’s lack of thought on this one. I mean, let’s face it: the only reason Google Images was upgraded recently was because Microsoft came out with Bing, and Bing Images was 10 times sassier than Google Images – even if the image search results weren’t quite as hot at first. So, Google was forced to update their service.

This whole “competition” thing is a good thing for us end users. I’m just not sure why the same thing hasn’t happened with Google Translate. Maybe they just haven’t gotten around to it yet…