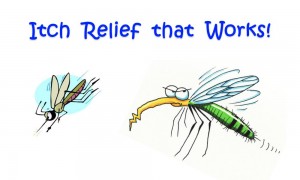 You know the drill: Hang around outside, get bitten or stung by various insects, and then itch like crazy for several days.

Not anymore! There’s a “new” insect bite treatment in town that really works.

You need one of these, called the Bite Away:

That one’s a bit on the pricey side, but that’s the one I use, and it works. There’s a different, cheaper version based on the same principle here:

So, how do they work?

The idea is that most insect venom is sensitive to heat. That’s what your body reacts to, and why you itch. You press the head of the gizmo onto your bite or sting, press the button, and wait a few seconds for it to heat up. The heat destroys the venom, and therefore the itch goes away… even if the bite still takes a few days to disappear.

The heat generated is usually about 50ºC, or 122ºF. I wouldn’t exactly call it a “comfortable heat”, but it is not burning hot. It won’t damage your skin, and you can repeat the process as often as needed. Some bites/stings will require a second application a day later if the itching returns. It’s the same as the hot spoon technique, but electronically controlled so you don’t accidentally burn yourself.

So, grab one today