JavaScript Fun: Looping with a Delay

We’re going to just use the following code as our “function”:

Normally you would probably want to do something a bit more complicated than that, but we’ll just keep things simple for the sake of the example.

Now, most likely, in order to alert “Cheese!” ten times (with a 3-second delay between each alert), the first thing you’ll probably try is this:

The above code will not do what you want, though. JavaScript executes linearly, one line after another. But it also has a stack, or a queue of operations to perform. The code works like so:

So, what’s the problem?

Well, the queuing of the setTimeout function and the for loop iterations happen “instantly”, or nearly so. That means that within milliseconds, all 10 of your alert(“Cheese!”); functions are queued up and ready to fire – one after the other, about 3 seconds in the future.

Instead of seeing 1 alert message every 3 seconds, what you get is a 3-second delay followed by 10 alert messages in quick succession!

Visually, you’re getting this: 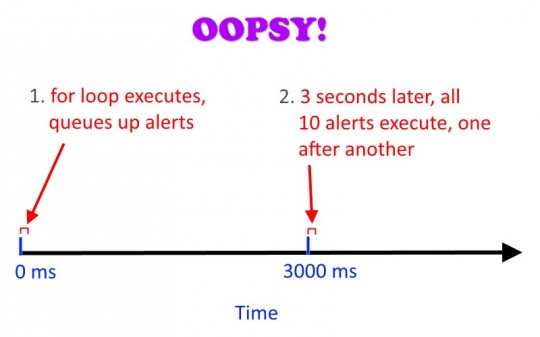 And that’s not what you want. So, what to do?

First of all, we’re using a self-invoking function. The last line calls the function theLoop, and passes it the value 10 for i.

Next, the setTimeout function will call the code inside after 3 seconds have passed. But notice the code included after the alert…

There is a check that says if we decrement i, and it’s still greater than 0, we should call theLoop(i) again. Note that this if statement and the subsequent calling of theLoop is not queued instantly, because all the code inside the setTimeout will only execute after 3 seconds has elapsed. So, this code works like so:

That’s exactly what we want: 10 alerts, and each alert pops up 3 seconds after the previous one.

If you’d like to get really fancy, you can do this:

If any of this is confusing, or if you’d really like to understand more about some of the pitfalls and complexities of JavaScript, you seriously need to read K. Scott Allen’s excellent explanations of things like this, Function.apply vs. Function.call, variable scopes, and closures in JavaScript: