First of all, you need to understand the underlying technologies we’re dealing with here, and the problems inherent in each. So, let’s start with some brief summaries.

Incandescent bulbs are basically your “standard” bulb. Yes, there are halogen bulbs, halogen spotlights, and so on. But for the most part, these are “regular bulbs”.

The good: The beauty of these old bulbs is that they have a Power Factor of 1 (see explanation of Power Factor below).

The bad: They generate a lot of heat in addition to light, and thus they are not very efficient in comparison to CFL and LED bulbs.

Note: Color Temperature is a measure of the color of the light measured in Kelvin – simply put. The sun is about 5800K. At 2700K, incandescent bulbs are more “reddish” (which humans perceive as “yellow”, but that’s a whole other story). Cooler or “bluer/whiter” colors are around 5000K and above. HID headlamps on cars can be between 6000-7000K. Thus, we humans perceive “warm indoor light” to be around 2700K, like a normal incandescent light bulb.

Tricks to choose a good one: None 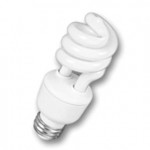 CFL bulbs are a smaller version of those big honkin’ fluorescent light tubes that grace most workplaces and school rooms.

The good: They use less power.

The bad: They have a Power Factor less than 1. Many contain mercury, so don’t break one. If you do, open all the windows and get out of the room for a bit. Then clean carefully. Mercury is poisonous. While you’re at it, get your mercury fillings removed, because guess what? Mercury in your fillings doesn’t magically become safe! What a concept, eh? Also, CFLs usually take time to warm up, and deteriorate over time in both intensity and color. Oh, and CFLs are expensive.

Lifetime: Usually 10,000 hours (10 times the life of a normal bulb). This will vary depending on quality. Also, don’t constantly turn CFLs on and off if you want them to last a long time!

Tricks to choose a good one: Pick “warm white” unless you really like that “cool white” look. Other than that, there’s not much to it.

LED bulbs are “the new CFLs”.

The good: They use even less power than CFLs

The bad: They can be rather dim. They also have a Power Factor less than 1. According to Energy Star requirements, LED lighting in the USA should have a Power Factor of at least 0.7 for bulb powers greater than or equal to 5W. Less than 5W, and there is no minimum Power Factor. The reason for this is that, unlike CFLs, LED bulbs do not require electronic ballasts and the generation of high frequencies to avoid flicker. But, LED bulbs do need circuitry to turn AC into DC at a lower voltage. The way they usually do this employs Power Factor-reducing tricks. Also, LED bulbs do not like heat! Fortunately, they normally run fairly cool, but in high-heat environments, they can degrade more quickly. And finally, LEDs are highly directional. So, choose a bulb that will emit light in the direction you need. Many LED bulbs that replace standard incandescents shoot all their light straight up, which wouldn’t make a very good bulb for a table lamp if you’re trying to read a book underneath it. LED bulbs are VERY expensive.

Tricks to choose a good one: First of all, if you’re replacing a spotlight type of halogen bulb that is 50W, don’t even consider any LED spot bulb less than 5W. The estimates on the packaging are kind of useless (like “3W = 35W regular spotlight bulb!” No, it doesn’t.) For all LED bulbs, ALWAYS pick the one with the highest power rating. LED bulbs are notorious for being too dim. This is changing slowly, but still… If you have a choice between a “8W = 100W normal” LED bulb, or a “12W = 100W normal” LED bulb, pick the 12W bulb.

Also, be sure to choose LED bulbs that explicitly state a color temperature of 2700K. Philips makes a line of bulbs that say “Warm white – 2700K”… That’s what you want. Otherwise, you will probably not be happy with the “cool” light produced by the LEDs. Some “warm” LED bulbs are more like 3300K, which still seems more harsh/cool than a CFL bulb with the same color temperature. So, check the Color Temperature! 2700K is your friend.

At this point, you’re probably wondering what the hell “Power Factor” is. If not, stop reading and skip to the last section!

Unless you’re into electrical engineering, don’t go looking for a detailed explanation of Power Factor. It will make your brain hurt. It made my brain hurt, but since I’m an engineer, I just had to grin and bear it.

Instead, just think of it this way: Simply put, Power Factor means how much power is wasted by the bulb.

A Power Factor of 1 means no power is wasted.

A Power Factor of 0.8 means that 25% more current is required by the bulb to do the same amount of real work. But electrical losses are related to the square of the current. If you need 25% more current, you have 1.5 times the losses.

With an even lower Power Factor of 0.7, 40% more current is required to do the same work, and you have about 2 times the losses.

Now, like I said, don’t try to understand all that unless you’re crazy like me. What you really need to take away from the above can be simplified as follows: As the Power Factor decreases even a small amount, the power company must generate more and more actual power in order for your light bulb to emit the same amount of light.

Practically speaking, that might mean that if you have a CFL bulb that says, “13W = 100W normal bulb!”, then since CFLs have a Power Factor of less than 1.0, your “13W” CFL bulb might actually be requiring the power company to generate 22W of actual power.

BUT… And there is always a big but in there somewhere… The more electrical devices with poor Power Factor, the more juice the power companies have to make, because the more “unbalanced” or “inefficient” the whole power transmission scheme becomes. Of course, I am oversimplifying things, but that’s the gist of it.

Aside from light bulbs, computers, motors, computers, clock radios, appliances, and just about ANYTHING that uses electricity will most likely have a Power Factor less than 1… Unless it is an incandescent light bulb, or something very simple like an electric heating element such as those in a hairdryer (which also have motors – oops!)… See what I mean?

So, are you saving energy? Yes. But you are also “unbalancing the grid” more, and that all adds up. Of course, you are only charged for the ACTUAL power your light bulb uses – i.e. 13W. But the power company still has to make that extra 9W to so that your 13W CFL bulb can actually work properly with it’s 22W of “apparent power” – due to its lower Power Factor.

Again, I am oversimplifying, and that is by design. This stuff really can make your head hurt, but I think it’s important to understand exactly what you are – and are NOT – doing when using these different kinds of bulbs.

If everyone gets 4 additional CFL bulbs for 4 new lamps since they use less energy, they might think they are only using 13W x 5 = 65W. In reality, the power company is spitting out 22W x 5 bulbs = 110W.

Oops. So much for “saving energy”. So, don’t go crazy on lighting just because you’re using CFLs or LEDs.

There is a LOT more to this Power Factor thing, including various issues that poor power factor will cause. That is all really beyond the scope of this post, but let’s just say that it really shouldn’t be ignored. In fact, poor Power Factor was so important that computer power supplies are required to have Active Power Factor Correction (some CFLs and LED bulbs also have Active PFC, but it depends since it increases the price of the bulb). Industrial plants that have large numbers of high-powered motors and other inductive loads (for example) are required to have Power Factor correction equipment, as well. If they didn’t have the PFC, it would put a huge strain on the grid, and they’d be charged through the nose by the electric company.

So, obviously, Power Factor is rather important and should be kept in mind when planning your lighting. The easiest solution is: don’t overdo it!

LED bulbs are also far less hazardous if broken, they run cool, and the light quality really is pretty nice now if you pick a 2700K flavor.

On the other hand, if you don’t get bright enough LED bulbs, you will definitely need to buy a lot more of them to get the same amount of light.

At the end of the day, if you remember nothing else, remember this: LED bulbs should be 2700K. Good luck!

28 thoughts on “How to Choose LED Light Bulbs: Efficiency, Power Factor, Color Temperature, and Everything Else”