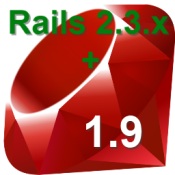 Just a note before we begin: I’m assuming that you’re smart, and therefore you’re using UTF-8 for your app. If you’re not, you’ll have to modify some of the code in this article to use your preferred encoding. If you want to convert your app to be fully UTF-8, see the link to my relevant post later in this article! Ruby 1.9 itself defaults to US-ASCII. Don’t ask why…

First you have to install a bunch of stuff just to compile Ruby. You might have this stuff already, but try the command anyway just in case:

Then you’ll go into some directory (like /tmp or something) and run the following commands as root to download, decompress, and build Ruby. It will live in /usr/local/ruby/:

Next, add your new Ruby to the path:

You’ll need to add the path /usr/local/ruby/bin/ at the front of the PATH variable like so:

Right, that was easy. Now, the ruby and gem commands will be run from your new Ruby 1.9.2 install. Rock on.

The next step is to reinstall all the gems you need for your Rails app. Be careful – you may need to update to a newer version of some gems to make sure they are Ruby 1.9-friendly. To find out what version of a gem you need, visit IsItRuby19.com. Pretty easy, eh? I have found that all of my app’s gems worked just fine even if they weren’t the latest and greatest version. Then again, I tend not to rely on many gems since quite often, they are not coded very well. So, I tend to roll my own solutions for things since I’m a stickler for performance!

If you are using Phusion Passenger and you try to reinstall the gem and it says:

OpenSSL support for Ruby... not found

Fear not! You need to go into a particular source directory in the Ruby 1.9 extracted files (/tmp/ruby-1.9.2-p136/ext/openssl/ in our case) and do the following:

Then give the Passenger install another whirl, and you should be good to go.

Anyway, next up: If you are using the mb_chars.normalize() method in your Rails app to normalize accented chars in a text string (to make UTF-8 characters like “é” become “e”) like so:

Then you’ll want to change it to this:

And then of course you’ll have to also do: gem install unicode_utils

Be advised that requiring ALL of UnicodeUtils is a very bad idea – it’s big!

In other words, you have to “spell out” each sequence of hex codes. Look carefully at the above two snippets again. They both say the same thing, but the second way is the proper Ruby 1.9 way. You CANNOT use the shortcut way that says “match \xe2 followed by \x80 followed by \x9c OR \x9d”. You’ll get an error if you don’t change the regex in the first snippet.

So, here’s the easy way. Create the file initializers/aa_ruby_19_patch.rb and paste this code into it:

Now, the above file will be included automagically by Rails at startup. Here’s what it does (if it detects that you are using Ruby 1.9 – if not, it does nothing, and is therefore backwards-compatible with Ruby 1.8):

Now, you might think you’re done, but there are a few other things to fix. If you have any helpers or models that do text processing involving strings, you’ll need to edit each one and add “# encoding: utf-8” as the very first line of the file. Save, and upload.

Finally, there is one other little gotcha I noticed: If you are using methods like this:

The reason is that in Ruby 1.9, even if use :force => true, an exception will be thrown if oldpath doesn’t exist. The same is true of other file operations like cp. Yes, that’s kind of dumb, because it defeats the purpose of :force => true, but it’s easy to fix. File.exists? first just checks to make sure oldpath exists (whether it’s a file or a directory). If it doesn’t, it skips the FileUtils.mv command. Voila! Problem solved.

Finally, you may encounter an error involving: active_support/core_ext/object/blank.rb:68

If so, include the following code in lib/stringfix.rb, and add require "stringfix" to your environment.rb:

OH! I almost forgot… If you have an error with a catch-all route that directs missing pages to public/404.html, and your file includes UTF-8 chars, the easy fix is to just replace the accented characters with HTML entities. In other words, replace all instances of “é” with “&eacute;” in public/404.html. You can get a list of character codes here: HTML – Special Entity Codes

Now, as you can see, there are quite a few little details you have to pay attention to. I had to search the net far and wide (and just experiment) to find all these little fixes. What amazes me is that no one has compiled them together in one article to make others’ lives a bit easier. I mean, let’s face it: Ruby 1.9.2 blows even REE 1.8.7 out of the water in terms of raw performance. Things like regex are twice as fast as in Ruby 1.8.x.

I also couldn’t believe the number of posts I found where people just gave up and went back to Ruby 1.8.x. Well, now you don’t have to!

I should also note that Ruby 1.9 is only 32-bit, which is actually a good thing. If you compiled REE on your 64-bit linux box, you may have noticed that instances of your app were twice as large since REE was apparently compiled as 64-bit. With 32-bit Ruby 1.9.2, you won’t have any wasted memory, which means you can run more instances of your app in, say, Passenger! Did I mention that Ruby 1.9 is also twice as fast?

Right. So, you should be good to go. If you found other fixes, please post them to the comments!