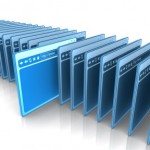 Alrighty. So, if you’re smart, you will use Rails’ fragment caching feature. It is the most flexible caching option if you need to cache individual sections or even entire pages on your site for maximum performance. It does have its problems, though.

Let’s say you have a cache directory with 50,000 cache files. Those cache files represent various chunks of various pages, all automagically generated by Rails’ cache method. Some might be for an entire method, like an RSS feed cache. Rails will dutifully generate all those cache files without a hitch. The problem comes when you want to expire a cache file so that Rails regenerates it on the next hit to that particular piece of content.

Well, normally, you’d just use the expire_fragment method. And, it just works. Sort of…

You see, when you have, say, 50,000 cache files stored in various nested subdirectories in your main cache directory, Rails expire_fragment method is very, very dumb, and very, very slow. The reason is that expire_fragment will more or less check every single file and directory in the cache until it finds the one it’s looking for – even if you have specifically told it, “Go expire /stamps/123/123847/user_comments“.

Yes, it’s THAT dumb. It will cause your disk usage to skyrocket and your server will slow to a crawl while it scans all those cache files needlessly.

Now, you might decide to just use FileUtils and remove the cache file manually. You can use it with Dir.glob to even match wildcards, like so:

That will go into your CACHEDIRECTORY/main_stamp_list/ directory and nuke all the .cache files. And it will do so very quickly – much more quickly than Rails can do it. In fact, you might think that your problems are solved.

But there’s an even better way to do these things: using an atomic file operation. Thanks go out to John Leach for this glorious solution.

To see why, consider this scenario: You have multiple people posting content to your site. When they post new content, it expires several different cache files. Now, what can happen is this:

You might think this is a rare occurrence, but it isn’t. Trust me on this one.

What you need to do is implement an atomic operation when deleting the cache files. Even a simple “rm” command can take awhile to complete, and so it has a “waiting period”. An “rm -r” is even worse. In other words, they aren’t atomic. But the “mv” command is atomic. It appears to happen “instantly” – and for all intents and purposes, it does.

So why the heck does all this atomic nonsense matter?

If you call this:

Then you will nuke the entire “stamp_categories” cache directory, and it will be regenerated on the next page hit.

Also note that you need to define some things for the above examples to work:

The above assumes your cache directory is RAILS_ROOT/tmp/cache/views/.

So what does the function actually DO?

That’s all there is to it. By using the “mv” command to rename the file/directory first, you have freed up the app from having to wait 300 years to do the actual deletion of the old cache file. And you most certainly will no longer have to wait for Rails’ inefficient expire_fragment method to scan all the darn cache files!

If you don’t have thousands of cache files, you may think you don’t need to go to all this trouble. But every little performance improvement adds up to huge cost savings in the long run!