The Difference Between Neutral and Earth Ground in AC Installations

If you’ve ever had the pleasure of upgrading old electrical wiring in a residence, you know that a separate earth ground wire was generally not used in the past. In such cases, you find yourself with 2 wires: live, and neutral.

Now, you might want to install a grounded outlet without redoing a lot of wiring. A common method of getting around this little problem is to install the new 3-conductor outlet by tying live to one prong, neutral to the other prong, and then using a jumper wire to connect neutral to the ground connection inside the outlet.

“Theoretically, this should work just fine!” you reason.

It turns out that theoretically, you are in fact correct. Practically speaking, adding a “ground” in a 2-wire installation by tying neutral and ground together has several serious – and possibly dangerous – drawbacks.

This here post assumes that you actually have some idea of how AC power systems work. Obviously, if you know very little about AC wiring and power distribution systems, you need to do some serious homework first before you get yourself killed. You can check out the following links:

Alrighty, now that that’s out of the way, here’s the deal. In a standard AC electrical scheme, there is a generator that spits out 3 phases of AC. Those phases are then fed to transformers, through high-voltage power lines over vast distances, through another local transformer to step down the voltage, and then into the main panel in your home. From there, you have wiring to your power outlets. Simple enough, yes?

Right. So there you are, and you have an old 2-wire system. Maybe in your main panel, you don’t even have circuit breakers – you might have fuses if your system is really old. Alternatively, if a bonehead electrician rewired your place at some point, you might have breakers and still have 2-conductor wiring everywhere. If your electrician is really bad, you could even have differential circuit breakers with no ground wires anywhere.

A differential breaker, or Ground Fault Circuit Interrupter (GFCI), uses an inductor to “measure” the current flowing through both the neutral and live wires. Normally, the currents flowing through both wires will be equal, and thus all is well. If, however, there is an equipment failure and/or live is shorted to ground through a human body, then obviously the currents through live and neutral will not be equal. At that point, the current imbalance (i.e. the current differential) trips the breaker, and power is cut. Since the trip current for such breakers is typically 30mA, and it takes somewhere around 200mA to stop a human heart, you can go ahead and drop your hairdryer into the bathtub with you and you won’t die. Sweet!

Okay, now comes the reason why using neutral as ground is NOT the best idea. The following is a typical electrical hookup: 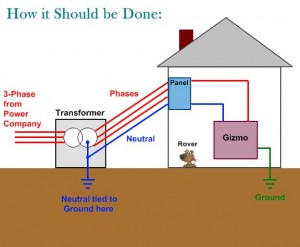 In any case, what happens when there is a fault in the gizmo? Let’s say that a fault occurs such that the live wire going into the electric gizmo is shorted to its metal casing. Since the metal casing is grounded, the fault current is shunted to ground as follows (look for the red dots): 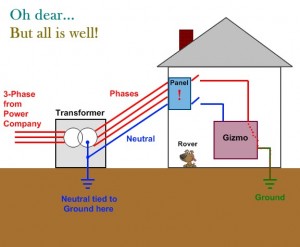 Here we see that the current is shunted to ground. When this happens, the differential breaker in the main panel detects that the current on the live is higher than the current coming back on the neutral wire. Thus, the breaker trips, and both live and neutral are cut off before anyone dies. This is a good thing.

All right – so what happens when we have 2-conductor wiring, and we connect ground and neutral at the power outlet for our Gizmo? See below: 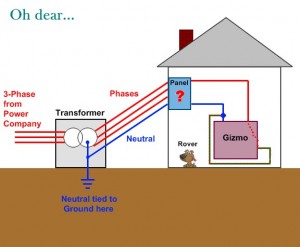 Now things might begin to become a bit more clear. In this case, when the Gizmo has a fault condition and current is shorted from live to the “grounded” casing, ground = neutral since we tied those two lines together in the power outlet! Thus, the circuit is not broken because even if we have a differential breaker in the main panel, it will not trip since everything seems well as far as the breaker is concerned. That’s bad.

Of course, if the failed Gizmo draws too much current, the fuse or normal breaker in the main panel will blow/trip – but we’ve lost the protection from electrocution provided by the differential breaker, which is kind of important.

Note that under normal conditions, the casing IS actually connected to ground in this case – via the neutral line back to the transformer. In the USA, neutral is also tied to ground at the main panel in each home. Still, if you look again at the diagram above, that does nothing to improve the situation.

You may be wondering what the fuss is all about. After all, assuming that all is well, the neutral-connected Gizmo casing will not electrocute you since you would actually have to be grounded in order for any current to flow through you. Furthermore, even if you ARE grounded, your body would probably present a higher impedance path to ground than the neutral line that runs back to the transformer where it is connected to an actual earth ground. As we know, electrons will always seek the path of least resistance since they are, in a word, lazy. And, as I already mentioned, neutral is basically “zero” current/voltage since the neutrals of all phases are connected together with earth ground. So, what’s the big deal?

Well, you kind of have a point – theoretically speaking. The problem comes when all is not well. You cannot rely on the neutral staying connected to all three phases. A separate earth ground provides an added layer of protection under severe fault conditions even if the above theoretical scenario is true. For example, if neutral is temporarily disconnected for some reason – either in your house or at the electric company’s equipment – you’ve got a problem. In fact, you’ve got a seriously big problem because at that point, power surge conditions can cause pretty big problems. When your Gizmos start to explode due to power spikes as a result of load imbalances in the 3-phase system, and there is no ground to save you, you’re in big trouble.

Granted, there are other safety systems in place. Granted, the aforementioned severe fault condition should be almost nonexistent in a well-maintained electrical system. But that brings up the whole point of a separate ground: safety! By connecting neutral and ground at the outlet, at the very least you are effectively disabling any human safety mechanisms present in the electrical installation in your home. At worst, you are asking for disaster – rare though such occurrences may be.

So, if you want to play it safe (and you do!), add a ground line to your 2-wire setup instead of connecting neutral and ground. Install differential circuit breakers for your own protection.

Theory is good, but practicality and safety is better.